Altered brain perfusion may play an important role in the development of sepsis-associated encephalopathy. However, whether or not cerebral autoregulation (CA) is preserved in such condition has been debated. CA is dependent on cerebral vascular tone, the main determinant of which is the concentration of carbon dioxide (CO2). The purpose of this study was to evaluate the influence of PaCO2 on the cerebral autoregulatory capacity in patients with septic shock.

Using transcranial Doppler sonography recordings from the middle cerebral artery (MCA), we evaluated the static cerebral autoregulatory responses within the first 3 days of septic shock. Changes in cerebrovascular resistance (CVR) were calculated from the changes in the mean velocity in the MCA (VMCA, cm/s), in response to an increase in mean arterial pressure (MAP, mmHg) induced by vasopressors. The cerebral autoregulation index (CAI) was calculated as the ratio of the relative changes in CVR and MAP (CAI = ΔMAP%/ΔCVR%), with normal values ranging between 0 and 2.

According to these data, CA is impaired in the majority of patients with septic shock, especially in the presence of hypercapnia. 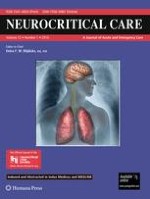 The Duties and Ethics of the Journal

Factors Associated with the Development of Anemia After Subarachnoid Hemorrhage

Tell Me Something I Need to Know

How I Manage the Adult Potential Organ Donor: Donation After Cardiac Death (Part 2)