A 53 year old female with ESRD on hemodialysis presented with headache, vomiting, and lethargy that had started 2 h prior to presentation. Magnetic resonance imaging revealed parenchymal hemorrhage in the temporal, occipital, and cerebellar white matter. Magnetic resonance venography disclosed hypoplastic transverse sinus. On cerebral angiogram there was no evidence of cerebral aneurysm, vasculitis or vascular malformation. Angiogram demonstrated a high-grade stenosis was present in the left internal jugular vein (IJV) just below the anastomosis of the graft. There was retrograde high flow in the left IJV above the anastomosis of the graft, which fills a small left transverse venous sinus. There was also filling of the multiple abnormally enlarged leptomeningeal veins over the surface of the left cerebral and left cerebellar hemispheres. Retrograde blood flow was due to IJV stenosis which led to cerebral venous hypertension and intraparenchymal brain hemorrhage. She then underwent occlusion of her left brachiojugular dialysis graft. Thereafter, her mental status markedly improved and her headache resolved. Since IJV stenosis and hypoplastic transverse sinuses are not rare, patients with jugular grafts should probably be closely watched for symptoms of increased intracranial pressure. As awareness of vein preservation in CKD patients grows, the prevalence of CVS would probably decline in future. 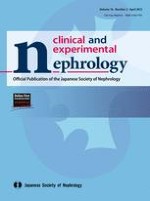 Recent advances in the treatment of lupus nephritis

Antihypertensive effect of a fixed-dose combination of losartan /hydrochlorothiazide in patients with uncontrolled hypertension: a multicenter study