Clamping and shunting during carotid endarterectomy (CEA) surgery causes changes in cerebral blood flow. The purpose of this study was to assess and compare, side by side, the cerebral oxygenation (rSO2) and processed electroencephalogram (EEG) response bilaterally to carotid artery clamping and shunting in patients undergoing CEA under general anesthesia. With institutional approval and written informed consent, patients undergoing CEA under general anesthesia and routine carotid artery shunting were recorded bilaterally, simultaneously and continuously with an rSO2 and processed EEG monitor. The response of the monitors during carotid artery clamping and shunting were assessed and compared between monitors and bilaterally within each monitor. Sixty-nine patients were included in the study. At clamping the surgical-side and contralateral-side rSO2 dropped significantly below the baseline incision value (−17.6 and −9.4 % respectively). After shunting, the contralateral-side rSO2 returned to baseline while the surgical-side rSO2 remained significantly below baseline (−9.0 %) until the shunt was removed following surgery. At clamping the surgical-side and contralateral-side processed EEG also dropped below baseline (−19.9 and −20.6 % respectively). However, following shunt activation, the processed EEG returned bilaterally to baseline. During the course of this research, we found the rSO2 monitor to be clinically more robust (4.4 % failure rate) than the processed EEG monitor (20.0 % failure rate). There was no correlation between the rSO2 or processed EEG changes that occurred immediately after clamping and the degree of surgical side stenosis measured pre-operatively. Both rSO2 and processed EEG respond to clamping and shunting during CEA. Cerebral oximetry discriminates between the surgical and contralateral side during surgery. The rSO2 monitor is more reliable in the real-world clinical setting. Future studies should focus on developing algorithms based on these monitors that can predict clamping-induced cerebral ischemia during CEA in order to decide whether carotid artery shunting is worth the associated risks. From the practical point of view, the rSO2 monitor may be the better monitor for this purpose. 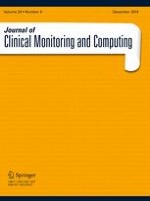