Cystic dysraphism of the cervical and upper thoracic spine is very rare. It differs from the much more common lumbosacral dysraphism in appearance and structure, and usually portends a better prognosis due to lack of functional neurological tissue in the dysraphic sac and absent or less severe intracranial anomalies. There is ambiguity in the literature regarding terminology because of the paucity of cases. We present cases of the most common type of cervicothoracic cystic dysraphism and emphasize differences from lumbosacral myelomeningocele. Patient outcome depends on the presence of associated anomalies and whether complete surgical resection is performed. Imaging plays a critical role in surgical planning, screening the central nervous system for additional anomalies, and in the postoperative setting for evaluation of retethering. 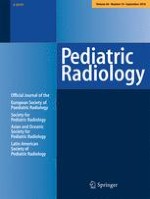 Anomalous origin of the left coronary artery from the pulmonary artery in children: diagnostic use of multidetector computed tomography