Nobuoki Kohno has a personal royalty of KL-6 from a Japanese pharmaceutical company, Eisai Co., Ltd. The remaining authors have no conflict of interest.

Gefitinib (ZD1839, Iressa; AstraZeneca) and erlotinib (Tarceva, OSI-774; OSI Pharmaceuticals) are orally active epidermal growth factor receptor tyrosine kinase inhibitors (EGFR-TKIs) used for the treatment of non-small cell lung cancer (NSCLC) patients [ 1]. EGFR-TKIs sometimes cause drastic tumor regression in specific subgroups of patients with advanced NSCLC, including women, non-smokers, patients with lung adenocarcinoma (ADC) histology, patients of Asian origin and patients with EGFR mutations [ 2– 6]. On the other hand, treatment with EGFR-TKIs is associated with serious side effects, such as life-threatening drug-induced interstitial lung disease (ILD), particularly in Japanese populations [ 7– 13]. These previous studies have reported that male gender, smoking history, poor performance status (PS), and preexisting ILD are risk factors for developing EGFR-TKIs induced ILD, however, we questioned whether each of these should be equally considered for the risk-benefit assessment to use EGFR-TKIs for the treatment of NSCLCs in a practical clinical setting. In addition, we also wondered whether we can assess the severity of EGFR-TKIs induced ILD when it develops during EGFR-TKIs treatment.
KL-6 is a mucin-like glycoprotein with a molecular weight of 200kd and has been classified as human MUC1 mucin [ 14– 17]. Previous studies have demonstrated that serum levels of KL-6 are elevated in a variety of ILDs, such as idiopathic pulmonary fibrosis (IPF), collagen vascular disease associated interstitial pneumonitis, radiation pneumonitis, pulmonary sarcoidosis [ 18– 26]. Furthermore, our laboratory has also demonstrated that absolute levels of KL-6 at the onset of drug-induced ILD can predict the clinical outcomes [ 27]. Although our previous studies have suggested the usefulness of KL-6 as a tumor marker [ 28, 29] and a predictor of survival in NSCLC patients treated with EGFR-TKIs [ 30], significance of circulating KL-6 level as a detector of EGFR-TKIs induced ILD or a predictor of clinical outcome in patients with EGFR-TKIs induced ILD has not been determined yet.
Anzeige
In the cohort of the present study, to obtain more information on risk factors for developing EGFR-TKIs induced ILD, the characteristics of NSCLC patients who developed ILD during EGFR-TKIs treatment were analyzed. In addition, to evaluate whether monitoring serum KL-6 levels in NSCLC patients during the treatment is useful to detect the development of EGFR-TKIs induced ILD or predict the clinical outcome of EGFR-TKIs induced ILD, circulating KL-6 levels were measured in NSCLC patients included in the cohort before and during EGFR-TKIs treatment.

Between August 2002 and August 2010, 341 advanced NSCLC patients treated with gefitinib (250 mg/day) or erlotinib (150 mg/day) at Hiroshima University Hospital (Hiroshima, Japan), Ehime University Hospital (Ehime, Japan), Shimane University Hospital (Shimane, Japan), Kochi University Hospital (Kochi, Japan) and Onomichi General Hospital (Hiroshima, Japan) were consecutively enrolled in the study. The disease staging was carried out using computed tomography (CT) scan of the chest and abdomen, bone scintigraphy or F-18 fluorodeoxyglucose positron emission tomography (FDG-PET/CT), and magnetic resonance imaging (MRI) of the head. To obtain information on both the response of tumor to EGFR-TKIs treatment and the occurrence of EGFR-TKIs induced ILD, chest radiography and/or CT scans were performed at least once a month at each institution, and the patients were followed-up until 12 weeks after the administration of EGFR-TKIs. Informed consent was obtained from all patients. This study complied with the Declaration of Helsinki, and was approved by the individual institutional Ethical Committees.

The presence of preexisting pulmonary fibrosis was determined according to the diagnostic criteria set by the ATS/ERS on the basis of clinical characteristic and/or chest CT findings, and the types of preexisting pulmonary fibrosis were classified into idiopathic pulmonary fibrosis (IPF) pattern and non-IPF pattern [ 31– 33]. In addition, the presence of preexisting pulmonary emphysema was determined by chest CT findings that show low attenuation areas occupying more than 25% of the entire lung field in at least one slice [ 34]. The diagnosis of EGFR-TKIs induced ILD was made using the diagnostic algorithm described elsewhere [ 11, 35]. We defined EGFR-TKIs induced ILD as diffuse pulmonary infiltrates newly developed during EGFR-TKIs treatment with lack of evidence for alternative diseases such as infection, tumor progression, heart failure and pulmonary embolism. When the occurrence of EGFR-TKIs induced ILDs was suspected, chest CT scans were performed, levels of brain natriuretic peptide (BNP) and D-dimer in blood were measured, the sputum culture, blood culture, urine antigen test for Legionella pneumophila and Streptococcus pneumoniae, cytomegalovirus antigen test, and polymerase chain reaction test for Pneumocystis jiroveci were conducted. When possible, bronchoalveolar lavage or lung biopsy was carried out. Tumor progression was carefully excluded on the basis of the clinical information including chest CT findings, physical examinations, and tumor markers. The final diagnosis of EGFR-TKIs induced ILD was made by the consensus of at least two independent pulmonologists. We collected the clinical information of all 341 patients, such as patient age, sex, histologic type, disease stage, performance status, prior chemotherapy and thoracic radiation therapy, preexisting pulmonary fibrosis, preexisting pulmonary emphysema, EGFR mutation status, types of EGFR-TKIs, duration of EGFR-TKIs treatment and laboratory data.

At least one serum sample was obtained before the EGFR-TKIs treatment from each patient included in the study. From 15 out of 20 patients who developed EGFR-TKIs induced ILD, a total of 2-5 serum samples per patient were also collected weekly after the occurrence of EGFR-TKIs induced ILD, and stored at -80°C. Serum KL-6 levels were measured by sandwich-type electrochemiluminescence immunoassay (ECLIA) using a Picolumi 8220 Analyzer (Eidia, Tokyo, Japan), as previously described [ 29, 30].

The data were analyzed with a statistical software package (JMP, version 7.0.1; SAS Institute Inc.; Cary, North Carolina) and p < 0.05 indicated a significant difference. Data are shown as the mean ± SEM. Differences between patients with and without preexisting pulmonary fibrosis, survivors and non-survivors, and patients with AIP pattern and the other patterns of EGFR-TKIs induced ILD were analyzed using the Mann-Whitney U-test. We analyzed differences between patients with preexisting pulmonary fibrosis who developed EGFR-TKIs induced ILD or not using the Fisher's exact test. In order to test differences among the variables evaluated prior to and at the diagnosis of EGFR-TKIs induced ILD, Wilcoxon test was used. The risk factors associated with EGFR-TKIs induced ILD were evaluated using multiple logistic regression analysis. The criterion for removing a variable was the likelihood ratio statistic, which was based on the maximum partial likelihood estimate (default p-value of 0.05 for removal from the model).

Incidence and characteristics of patients with EGFR-TKIs induced ILD

Among the 341 patients included in this study, 20 (5.9%) developed EGFR-TKIs induced ILD, and 9 (2.6%) died from ILD. Table 3 shows the characteristics and clinical course of these 20 patients. All the patients had acute onset or exacerbation of respiratory symptoms. The median interval from the administration of EGFR-TKI to the occurrence of EGFR-TKIs induced ILD was 19 days (range 5-51 days). The subclassifications of EGFR-TKIs induced ILD categorized by the findings of chest CT scans in these 20 patients were as follows: AIP pattern in 5 patients, COP/EP pattern in 9 patients, and HP pattern in 6 patients. The CT images of 5 patients who demonstrated AIP pattern are shown in Figure 2. When the occurrence of EGFR-TKIs induced ILD was suspected, the administration of EGFR-TKI was immediately stopped and high dose methylprednisolone (1,000 mg daily for 3 days) therapy was started. All of the 5 patients with AIP patterns were refractory to the treatment and eventually died, whereas 7 of 9 patients with COP/EP pattern and 4 of 6 patients with HP pattern showed immediate response to the treatment. Postmortem examinations were performed in 3 patients (patient No. 5, 8 and 11) and diffuse alveolar damage (DAD) was detected histologically in all of them. In addition, the presence of preexisting pulmonary fibrosis was suspected in 2 of the 3 patients. Neither infection nor lymphangitic spread of cancer cells was pointed out in any of them.
Table 3
Characteristics of 20 patients with EGFR-TKIs induced ILD
Abbreviations: ADC, Adenocarcinoma; SCC, Squamous cell carcinoma; Rec, Recurrence after the surgery; CT, Chemotherapy; RT, Radiation therapy; N.E, Not evaluated; COP/EP, Cryptogenic organizing pneumonia/Eosinophilic pneumonia; HP, Hypersensitivity pneumonitis; DAD, Diffuse alveolar damage.
×

Our results indicate that the change in serum KL-6 level from baseline should be useful biomarker for the diagnosis of life-threatening EGFR-TKIs induced ILD and for estimating its progress and severity. A risk-benefit analysis and patient selection should be considered as well as close monitoring of serum levels of KL-6, particularly if using EGFR-TKIs in patients with preexisting pulmonary fibrosis.

This work was partly supported by Grants-in-Aid for Scientific Research from the Minister of Education, Culture, Sports, Science and Technology of Japan.

Nobuoki Kohno has a personal royalty of KL-6 from a Japanese pharmaceutical company, Eisai Co., Ltd. The remaining authors have no conflict of interest. 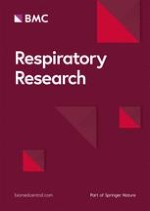 Smoking, longer disease duration and absence of rhinosinusitis are related to fixed airway obstruction in Koreans with severe asthma: findings from the COREA study

The clinical significance of 5% change in vital capacity in patients with idiopathic pulmonary fibrosis: extended analysis of the pirfenidone trial

In vivo imaging of the airway wall in asthma: fibered confocal fluorescence microscopy in relation to histology and lung function