Fifty-one TKAs (mean age 73.7 years) were included in this study. The three dimensional, weight-bearing knee alignment was measured before and after TKA. A transepicondylar axis was referenced to femoral component rotation, and an anteroposterior axis of the tibia (middle of posterior cruciate ligament attachment to medial border of patella tendon attachment) was referenced to tibial component rotation. Knee rotational angle was defined as the angle between these two axes.

Rotational malposition of the tibial component was considered to be a main factor of rotational mismatch of the knee after TKA. 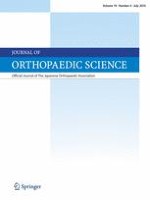 Outcomes and complications of fractures of distal radius (AO type B and C): volar plating versus nonoperative treatment

Erratum to: Outcomes and complications of fractures of distal radius (AO type B and C): volar plating versus nonoperative treatment

Comment on Matsumura et al.: changes in water content of intervertebral discs and paravertebral muscles before and after bed rest