The online version of this article (doi:10.​1007/​s00125-016-3942-3) contains peer-reviewed but unedited supplementary material, which is available to authorised users.

Type 2 diabetes is a progressive disease that increases morbidity and the risk of premature death. Glucose dysregulation, such as elevated fasting blood glucose, is observed prior to diabetes onset. A decline in beta cell insulin secretion contributes to the later stages of diabetes, but it is not known what, if any, functional beta cell changes occur in prediabetes and early disease.

The Lepr db mouse (age 13–18 weeks) was used as a model of type 2 diabetes and a two-photon granule fusion assay was used to characterise the secretory response of pancreatic beta cells.

We identified a prediabetic state in db/db mice where the animals responded normally to a glucose challenge but have elevated fasting blood glucose. Isolated islets from prediabetic animals secreted more and were bigger. Insulin secretion, normalised to insulin content, was similar to wild type but basal insulin secretion was elevated. There was increased glucose-induced granule fusion with a high prevalence of granule–granule fusion. The glucose-induced calcium response was not changed but there was altered expression of the exocytic machinery. db/db animals at the next stage of disease had overt glucose intolerance. Isolated islets from these animals had reduced insulin secretion, reduced glucose-induced granule fusion events and decreased calcium responses to glucose.

Beta cell function is altered in prediabetes and there are further changes in the progression to early disease. 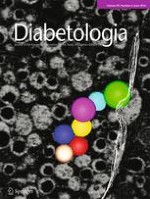 A very-low-protein diet ameliorates advanced diabetic nephropathy through autophagy induction by suppression of the mTORC1 pathway in Wistar fatty rats, an animal model of type 2 diabetes and obesity

The liver in focus