This study aimed to measure the income-related inequality of depressive symptoms and its trends among middle-aged and elderly people in China.

Data were extracted from the 2011 baseline and 2015 follow-up of the China Health and Retirement Longitudinal Study (CHARLS), a nationally representative survey for people aged 45 years and more. Depressive symptoms were evaluated with the Chinese version of the ten-item Center for Epidemiologic Studies Depression Scale. Five relative income levels were derived from ratios between the participants’ annual per capita household expenditure, excluding medical expenditure, and the median PCE of their cities. The concentration curve and index were used to compare the magnitude of income-related inequality between 2 years. A logistic regression model was used to control the other socio-economic factors.

The prevalence of depression among middle-aged and elderly people in China decreased from 37.0% (5540 of 14,956 participants) in 2011 to 32.7% (5606 of 17,165) in 2015. However, the absolute value of the standardized concentration index increased from 0.005 to 0.028. Although the second lowest-income group had the greatest improvement in the decline of prevalence (5.7%, from 38.6 to 32.9%), the lowest-income group had only the minimal decline (2.4%, from 40.6 to 38.2%). In 2015, there were significant differences between the lowest-income group and other four groups while the differences among other four groups were not statistically significant.

The prevalence of depression among the middle-aged and elderly in China is declining, but the issue of income-related inequality has been exacerbated. The fairness of mental health deserves more attention. 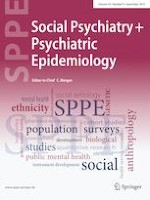 Food insecurity and work impairment in people with severe mental disorders in a rural district of Ethiopia: a cross-sectional survey

Impact of personality disorders on leaving hospital against medical advice among people living with HIV in British Columbia, Canada

Inequality within a community at the neighborhood level and the incidence of mood disorders in Japan: a multilevel analysis

Perceived discrimination and psychosis: a systematic review of the literature

The rural children’s loneliness and depression in Henan, China: the mediation effect of self-concept

An updated picture of the mental health needs of male and female prisoners in the UK: prevalence, comorbidity, and gender differences