Changes in the epidemiology and aetiology of dental traumatic injuries in permanent teeth in children before and after German unification | springermedizin.de Skip to main content
TOOLBAR 1 2 3 4
SUCHE MENÜ 1 2 3 4

To evaluate the longitudinal occurrence of traumatic dental injuries in permanent teeth comparing recent data from 2014 to 2016 in Greifswald after German unification with a historic sample from socialist times (1974–1989).

In this retrospective study, traumatic dental injury parameters as type, date, location, and cause of injury as well as tooth affected were extracted from the trauma records of patients from 1974 to 1989 and 2014–2016.

This study detected a very stable pattern of dental traumatic injuries over 40 years, even after the change from a socialistic society to a market economy. 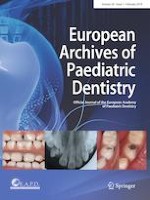 Evaluation of the efficiency of fluoride-releasing adhesives for preventing secondary caries in-vitro: a systematic review and meta-analysis