We examined the effect of ischemic preconditioning (IPC) on changes in muscle force, activation, and the spinal reflex pathway during and after repeated sprint cycling.

IPC did not affect any measure of neuromuscular function or performance during cycling. Maximal force and muscle contractility were significantly lower at POST and 1H compared to PRE and 24H by up to 50% (p < 0.01). Maximal force was lower than PRE at 24H by 8.7% (p = 0.028). Voluntary activation and rate of force were unchanged. A rightwards shift was observed for the H-reflex recruitment curve POST, and post-activation depression was higher than all other time-points at 24H (p < 0.05). Muscle activation and oxygenation decreased during cycling.

IPC has a nominal effect on mechanisms associated with neuromuscular function during and after exercise in healthy populations. 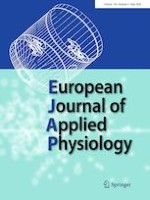