Changes in tubular dysfunction marker levels in parallel with the levels of copper, rather than cadmium, in urine of middle-aged women in non-polluted areas | springermedizin.de Skip to main content
TOOLBAR 1 2 3 4
SUCHE MENÜ 1 2 3 4

This study was initiated to investigate if and to what extent the elevations in urinary α1- and β2-microglobulins (α1-MG and β2-MG, respectively) are specific to Cd nephro-toxicity.

Stored urine samples, collected from 1,000 adult women in 11 prefectures all over Japan, were analysed for eight elements (Ca, Cd, Co, Cu, Mg, Mn, Ni and Zn), α1-MG, β2-MG, creatinine (CR) and specific gravity (SG); the data were cited from previous publications. The levels of eight elements and two MGs were expressed as observed and after correction for CR or SG (1.016). Age, CR and SG distributed normally, whereas two MGs and eight elements distributed log-normally. The 1,000 cases were classified into quartiles (i.e., 250 cases/group) of the lowest to the highest values (Groups A to D) for each element.

Urinary levels of α1-MG and β2-MG among women with no environmental Cd exposure correlated more closely with Cu levels than Cd levels in urine. The observation suggests that sub-clinical elevation in α1-MG and β2-MG is not always attributable to nephro-toxicity of Cd, and that consideration on possible effects of other elements such as Cu is necessary. 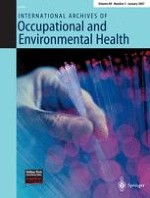 Effectiveness and efficiency of a literature search strategy to answer questions on the etiology of occupational diseases: a controlled trial

Environmental monitoring of occupational exposure to N,N-dimethylformamide: comparison between active and diffusive sampling

Asthma, eczema, and reports on pollen and cat allergy among pupils in Shanxi province, China