To conduct a survey of the local prevalent bacteria and antibiotic resistance in a referral tertiary neonatal intensive care unit (NICU), in order to assess the efficacy of local antibiotic policies. We reviewed all positive blood and cerebrospinal fluid cultures obtained between January 2007 and December 2017 in the NICU of Schneider Children’s Medical Center of Israel. Early and late-onset bacteremia were defined as episodes occurring within or after the first 3 calendar days of life respectively. Empiric treatment included ampicillin and gentamicin or piperacillin-tazobactam and amikacin for early or late-onset bacteremia respectively. The prevalence and antibiotic resistance of the bacteria were described and compared over time. Eight hundred and twenty nine of 15,947 (5.2%) newborns had at least one episode of bacteremia; 81 had multiple episodes. The most common bacteria were Escherichia coli (32.35%) and group B Streptococcus (19.11%) or coagulase negative Staphylococcus (CoNS) (60.5%) and Klebsiella sp. (12.4%) in early or late-onset bacteremia respectively. Overall, all Gram-positive bacteria were susceptible to vancomycin and most non-CoNS to ampicillin. Nosocomial vs. vertical bacteremia had increased resistance to ampicillin and cephalosporins. Resistance of nosocomial bacteria to piperacillin-tazobactam was 22.4%, to amikacin 3.3%, and to meropenem 1.8%. Changes over time: Gram-negative bacteria had a significant increase in resistance to cotrimoxazole and piperacillin. The resistance to gentamicin doubled. Our empiric antibiotic regimen covers the most frequent isolates. Amikacin may replace gentamicin for selected sick patients in early-onset bacteremia. Piperacillin-tazobactam should be combined with amikacin until susceptibility is available. 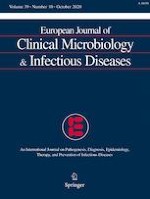 The Allplex 2019-nCoV (Seegene) assay: which performances are for SARS-CoV-2 infection diagnosis?