Congenital high airway obstruction syndrome (CHAOS) is a rare, usually lethal abnormality characterized by complete or near-complete intrinsic obstruction of the fetal airway. Laryngeal atresia is the most frequent cause, but other etiologies include laryngeal or tracheal webs, laryngeal cyst, subglottic stenosis or atresia, tracheal atresia and laryngeal or tracheal agenesis. When antenatal diagnosis of possible upper airway obstruction is made, specific type of obstruction is rarely determined making the term CHAOS introduced by Hedrick et al in 1994 more appropriate.

Sonographic findings in CHAOS are characteristic and are secondary to high airway obstruction. The lungs are symmetrically enlarged, echogenic and homogenous. The distended lungs have mass effect on the diaphragm, which appears flattened or inverted, and the heart is displaced anteriorly in the midline. The heart often appears dwarfed by the surrounding enlarged lungs.

The primary abnormality is an intrinsic obstruction of the upper airway. Normal lung development involves a continuous efflux of fluid from the fetal lungs. Laryngeal atresia/CHAOS stops the efflux of this fluid, and this retained fluid distends the alveoli with fluid giving the lungs voluminous echogenic appearance and inverting the diaphragm. Isolated airway obstruction without hydrops has a relatively favorable prognosis. CHAOS with associated anomalies and with early presentation of hydrops is an ominous sign with a high rate of fetal demise and a poor survival rate even with the ex utero intrapartum treatment (EXIT) procedure. 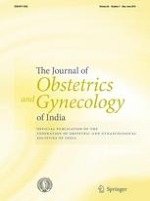 Gliomatosis Peritonei Arising in Setting of Immature Teratoma of Ovary: A Case Report and Review of Literature