Insulin glargine 300 U/ml (U300) was registered based on the EDITION clinical trial program. The aim of this database analysis was to describe the profile of adult U300 recipients with type-1 (T1DM) or type-2 diabetes (T2DM).

The analysis was based on data from the German DIVE/DPV registries. Patients were sampled in May (DIVE) and in March 2018 (DPV) and divided into those who commenced U300 within the 1st year (early adopters) or 2nd year (late adopters). Patients were further compared to patients receiving U100 during the same time period.

Among 581,519 adult patients contained in the databases, 7268 with either T1 or T2DM received U300 and 22,050 U100. Baseline characteristics of U300 and U100 recipients did not differ substantially in both types of diabetes. Patients with T2DM had many risk factors and comorbidities. The median HbA1c (both T1DM and T2DM, 8.1% for U300 and 7.9 and 8.3% for U100) and fasting blood glucose values were similar at baseline. Severe hypoglycemia was less prevalent in T2DM and among recipients of U300 (3.1 vs. 3.9%), whereas in T1DM the rate was higher (10.6 vs. 10.1%). There were minor, but clinically probably irrelevant, differences in age and BMI for T1DM and T2DM between the first and second years. Patients with T2DM being initiated in the second year had a higher HbA1c value (8.6 vs. 8.3%) than those initiated during the first year. Patients in clinical practice showed substantially higher HbA1c values in both T1DM and T2DM, and doses used were lower than those reported from the EDITION trial program. U300 patients had a longer diabetes duration (T1 and T2DM), a higher BMI and received higher basal insulin doses (T1 and T2DM) compared to U100. While HbA1c was comparable, the rate of severe hypoglycemia under U300 was reduced in T2DM but not T1DM with or without adjustment for differences in baseline characteristics in T2DM.

The data confirm the clinical profile documented for U300 in the EDITION studies during the first years of its registration. In an unselected patient population, there was a lesser rate of severe hypoglycemia but at a comparable HbA1c.

German Centre for Diabetes Research (DZD) (01GI1106), the European Foundation for the Study of Diabetes (EFSD) and the German Diabetes Society (DDG). The DIVE registry (organized as Diabetes Agenda 2010 GmbH, Berlin, Germany) received funding from Sanofi, AstraZeneca, Bayer, and Abbott and was conducted under the auspices of diabetesDE. 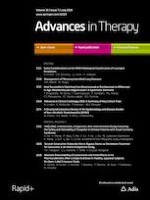 Absolute Bioavailability of Esaxerenone and Food Effects on its Pharmacokinetics After a Single Oral Dose in Healthy Japanese Subjects: An Open-Label Crossover Study

Relative Oral Bioavailability of an Abuse-Deterrent, Immediate-Release Formulation of Oxycodone, Oxycodone ARIR in a Randomized Study