Age-related changes have been documented in anatomical studies on peripheral as well as central vestibular systems. Similar changes have also been observed for saccular responses evaluated through Cervical vestibular evoked myogenic potential (cVEMP) after the age of 60 years. Nevertheless, most of these studies have either made use of small sample sizes, considered inappropriate for normative studies of such kind, or incorporated wider age groups which might have confounded the conclusions. In order to overcome the above shortcomings, the present study aimed at evaluating the effect of age on cVEMP using larger sample size and distributing the participants to smaller age group divisions. A cross-sectional design was employed to record cVEMPs from 280 healthy volunteers in the age range of 10–85 years who were distributed to seven age groups (10–20, 20–30, 30–40, 40–50, 50–60, 60–70 and above 70 years). The latency, amplitude, inter-aural asymmetry ratio, and threshold were compared using one-way analysis of variance, whereas the response rate was calculated in terms of percentage of ears in which the responses were identifiable. The results revealed a steady decline in response rate and amplitude with advancing age beyond 5th decade (50–60 years). In addition, the latency of P13 and N23 was prolonged, while the thresholds worsened with increasing age also after 50 years. Hence, age-matched norms have to be considered while interpreting the results of cVEMP, especially in individuals above 50 years of age. 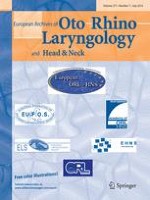 Transcervical extirpation of the submandibular gland: the University of Marburg experience