Characterization of the anatomy of the anterolateral ligament of the knee using magnetic resonance imaging | springermedizin.de Skip to main content
TOOLBAR 1 2 3 4
SUCHE MENÜ 1 2 3 4

The anterolateral ligament (ALL) may limit tibial internal rotation and pivot-shift following anterior cruciate ligament reconstruction. Previous studies, using magnetic resonance imaging (MRI) to identify this structure, have been inconsistent. We aimed to further characterize the anatomy of this ligament with reference to previous work.

Institutional Review Board approval was gained and a retrospective study of 154 consecutive 1.5-T MRI studies was performed by a consultant musculoskeletal radiologist. Cases with a lateral compartment or cruciate injury and patients under 16 years were excluded. A total of 100 MRIs (98 patients; 63 males: 35 females; mean age, 45.3 years, range, 16–85 years) were included in the study.

The ALL was visualized partially in 94 (94.0 %) of the cases and fully with distinct femoral and tibial fibers in 57 (57.0 %) of the cases. Although the femoral origin was discreet in only 57 (57.0 %) of cases, the tibial insertion (7.64 ± 1.26 mm below the joint-line) and meniscal attachment were demonstrated in all cases where the ligament was seen. Where the femoral origin was not seen, a broad expansion of the ligament was noted. We identified four types of meniscal attachment (complete, central, bipolar, and inferior-only). The thickness of the ALL, at the level of the joint-line, was 1.75 ± 0.57 mm.

The ALL is a consistent structure with meniscal and tibial portions identifiable in the majority of MRI studies of the uninjured knee. There is an attachment to the lateral meniscus with anatomical variation described by our subclassification. 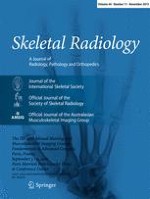 Glenoid version by CT scan: an analysis of clinical measurement error and introduction of a protocol to reduce variability

Bilateral atypical femoral fractures: how much symmetry is there on imaging?