The microfibrillar protein fibrillin-1 is expressed abundantly in the vasculature and the glomerulus of the kidney. Mutations in the fibrillin-1 gene lead to Marfan syndrome. The most common complication of this disease is aortic dilatation due to elastic deficiencies of the vascular wall. Several case reports describe glomerular disease in patients with Marfan syndrome, and fibrillin-1 has been implicated in nephrogenesis. To study the role of fibrillin-1 in renal development and function, we characterized the renal phenotype of fibrillin-1-underexpressing mice. Kidney histology was evaluated by means of morphometry and stereology. Relative kidney weights, daily urine excretion, urinary albumin excretion, serum and urinary creatinine, as well as serum urea were not different than wild-type mice. Glomerular number and renal capillarization were normal. The size of the renal filtration surface was comparable in wild-type and fibrillin-1-underexpressing mice. There was no indication for glomerular, renal vascular, or tubulointerstitial injury. However, glomerular volume and mesangial area were reduced. No changes in glomerular cell numbers were detected, but the cellular volume of mesangial cells was significantly lower in glomeruli of fibrillin-1-underexpressing mice. Thus, despite the high abundance of fibrillin-1 in glomeruli of wild-type animals, underexpression of fibrillin-1 did not lead to functional deficiencies of the glomerulus. Alterations in renal histology were only subtle with a reduced glomerular volume and mesangial area likely due to a reduced mesangial cell volume. 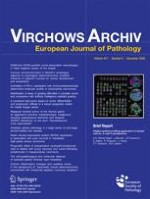 Mixed epithelial and stromal tumors of the kidney. A report of 22 cases