Unique variants of the pectoralis major and biceps brachii were found during a routine student dissection of a 96-year-old Caucasian female’s axilla and brachium. The donor cadaver had bilateral presentation of a muscle originating from the pectoralis major, near the lateral lip of the intertubercular groove, extending obliquely to insert on the medial intermuscular septum and medial epicondyle of the humerus. This muscle variant is currently described as a rare presentation of the chondroepitrochlearis, potentially a remnant of the panniculus carnosus in man. Often considered to be a thin, slender muscle taking origin from the true ribs, the right-side chondroepitrochlearis described in this report was notably larger—to the authors’ knowledge—than all other published cases, measuring 38.1 mm at the widest point. Meanwhile, another small muscle originating on the posterior surface of the pectoralis major tendon was present. Due to its insertion, the muscle was identified as a supernumerary portion, or a third head, of the biceps brachii. The proximal attachment of both the chondroepitrochlearis and the third head of the biceps brachii could impose functional limitations on the pectoralis major. 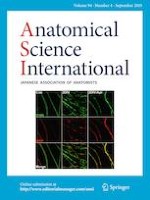 Incidence of vertebral artery of aortic arch origin, its level of entry into transverse foramen, length, diameter and clinical significance

Histological and biochemical changes induced by gibberellic acid in the livers of pregnant albino rats and their offspring: ameliorative effect of Nigella sativa

Two mammalian species in which the intercostal nerves innervate the serratus anterior or scalenus muscles together with the cervical nerves: an important clue to clarify the homology of cervico-thoracic trunk muscles in mammals