Chordoma is a rare tumor, and its natural history is still not well known.

All patients affected by localized chordoma surgically treated at Istituto Ortopedico Rizzoli, Bologna, and Istituto Nazionale Tumori, Milan, Italy, between 1980 and 2008 were reviewed. Local recurrence, distant metastasis, and overall survival (OS) were analyzed both from time of diagnosis and from time of local recurrence/distant metastasis. A multivariable analysis to identify independent prognostic factors was carried out.

Tumor size and surgical margins affected outcome only on initial presentation. However, wide surgery was feasible in a minority of cases. Most patients died of local–regional disease even when metastases occurred. Indeed, long-term prognosis was such that disease-free survival at 10 years was only 26%. 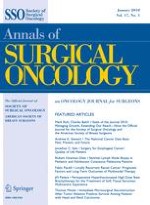 Vascular Anomalies Encountered During Pancreatoduodenectomy: Do They Influence Outcomes?

Practice Patterns and Outcomes for Anorectal Melanoma in the USA, Reviewing Three Decades of Treatment: Is More Extensive Surgical Resection Beneficial in All Patients?