The purpose of this study was to investigate chromatic visual evoked potential (cVEP) response characteristics during the first year of life and to collect as large database of healthy baby responses as possible. This study also complements our previous studies on cVEP in schoolchildren and preschool children.

Forty-four healthy babies aged 3–12 months were binocularly tested. cVEP were recorded to isoluminant red-green (R–G) and blue-yellow (B–Y) stimuli. The stimulus represented a circle composed of horizontal sinusoidal gratings with 90 % chromatic contrast and spatial frequency of 2 cycles/deg. Two stimulus sizes (7° and 21°) and onset–offset mode of stimulation (On—300 ms, Off—700 ms) were used. cVEP were recorded from Oz (mid-occipital) position with the reference at Fz. Waveform characteristics and its changes throughout the first year of life were studied.

Chromatic visual evoked potential can be reliably recorded after the age of 3 months and show significant maturational changes throughout the first year of life. 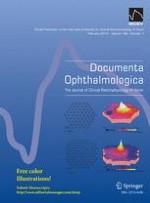 Non-selectivity of ERG reductions in eyes treated for retinoblastoma