Chronic obstructive pulmonary disease (COPD) may be associated with worsening of cognitive performance. We studied patients with Alzheimer’s disease (AD) with and without COPD, and we analyzed, in a retrospective way, clinical and neuropsychological variables to verify if COPD plays a pejorative role on cognitive or functional autonomy in patients with dementia.

We enrolled 23 adult patients (AD-COPD) with probable AD and COPD and 23 with AD only (AD-only); they were matched for sex, age, educational level, and Mini Mental State Examination (MMSE) at the disease onset. Global cognitive status was estimated using MMSE at the first assessment and after 24 months. Memory, executive functions, praxia, and language were the other cognitive domains analyzed. The two groups were also compared for the presence of behavioral disorders (anxiety, depression).

COPD is known to be associated with the development of cognitive deficits, in particular, regarding for executive functions and attention, memory and logical reasoning. In this context, MMSE has a low diagnostic accuracy to underline effective cognitive impairment in AD-COPD. Our study shows a higher frequency of frontal deficits and behavioral disturbances in patients with AD and COPD than patients with AD-only. COPD could complicate the management of AD patients, thus necessitating a closer and multidisciplinary monitoring. 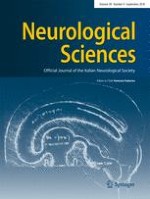 Topographical disorientation in aging. Familiarity with the environment does matter

Contralateral Parkinson’s disease in a patient with diabetic hemichorea