Worldwide groin hernia repair is one of the most common operations performed in general surgery, with any complication affecting a high number of patients. Since the introduction of the tension-free mesh technique by Lichtenstein in 1984, recurrence rates have diminished to an acceptable level. This has drawn attention to chronic pain and functional impairments. With a reported incidence varying from 14 to 54%, several studies have shown chronic pain to be a common sequel after groin hernia repair [ 1– 11]. As a result about 11% of patients are claimed to be functionally impaired in their work or leisure activities [ 1]. Causative mechanisms are thought to be neuropathic (entrapment or injury of ilioinguinal, iliohypogastric or genitofemoral nerves) or somatic (tissue damage, scar formation) [ 12]. In the present study we evaluated the results and complaints of a large group of patients after elective groin hernia repair performed mainly by residents in two teaching hospitals.

This is a population-based postal questionnaire study of consecutive adult patients (≥18 years) who underwent groin hernia repair between January 2000 and August 2005 in two teaching hospitals [the Máxima Medical Centre in Eindhoven (MMC-E) and Veldhoven (MMC-V), The Netherlands, serving a total population of approximately 350,000 inhabitants]. Patient records were checked to exclude patients who were deceased or unable to return the questionnaire because of mental incapacities. If patients had moved and no current address was available, they were excluded as well. The surgical techniques included were both open (Lichtenstein, Shouldice) and laparoscopic repair (total extra peritoneal, TEP; transabdominal preperitoneal, TAPP) for primary or recurrent and uni- or bilateral groin hernias.
Anzeige
To assure that the International Association for the Study of Pain's definition of chronic pain (pain persisting beyond the normal tissue healing time, assumed to be three months) was applicable to all reported pain complaints, the shortest follow-up period was three months [ 13]. The questionnaire was based on information from various previous studies [ 1– 11] (See Appendix). Between November 2005 and February 2006 all patients of the Máxima Medical Centre were sent a questionnaire with a pre-stamped envelope with questions regarding frequency and intensity of pain, suspicion of recurrence, presence of numbness and degree of functional impairment in work or leisure activities. Pain intensity was measured with a visual analogue scale (VAS). This is a 10 cm scale with on the one end no pain and on the other unbearable pain. In order to evaluate different severities it was subdivided according to a previously validated classification: 0 = no pain, <3 = mild pain, 3–7 = moderate pain, >7 = severe pain [ 14]. In the present study, chronic pain was defined as any VAS > 0. After two months all non-responders were reminded by telephone or by post.
Statistical analysis was carried out using the Statistical Package for the Social Sciences (SPSS), Windows version 12.0.1. The level of significance was set at a P value of 0.05. Pearson χ 2 test was used to determine statistical significance between different variables and the presence of pain.

A total of 2,339 elective groin hernia repairs were performed on adult patients between January 2000 and August 2005 in the Máxima Medical Centre in Eindhoven ( n = 973) and in Veldhoven ( n = 1,368). Since the operation 82 patients had died and 75 patients had moved. Another 18 patients were excluded because of mental incapacitation, leaving 2,164 patients. The questionnaire was returned by 1,766 patients (MMC-E n = 702, MMC-V n = 1064) resulting in a response rate of 81.6% (Fig.  1). The study population consisted mainly of males (95%) with a median age of 60 years. In the MMC-V 90.5% of all repairs was performed using an open anterior technique (Lichtenstein 89.0%, Shouldice 1.5%), as opposed to the MMC-E, where almost half of the surgery was done laparoscopically (47.5%, mainly TAPP). Demographic and operative characteristics are listed in Table  1.
Table 1
Demographic and operative characteristics of 1,766 patients who completed the questionnaire
Values in parentheses are numbers of patients
TEP total extra peritoneal, TAPP transabdominal preperitoneal (range)
×
After a median follow-up period of 2 years and 11 months, pain was reported by 40.2% of the patients (810/1,766). Severe pain was reported by 33 patients (1.9%). Pain frequency and intensity are graphically shown in Figs.  2 and 3, respectively. As a result of persisting pain 21% of the patients was confronted with some degree of limitations in daily functioning (severe functional impairment = 1.2%). Severity of functional impairment is detailed in Table  2. A bulge was noticed by 13.2% of the patients and 25.8% (MMC-E 16.6%, MMC-V 29.9%) experienced numbness in the groin area. Laparoscopic procedures were associated with statistically fewer cases of numbness than the anterior approach ( P < 0.001). Surgical technique (open or laparoscopic treatment) was not significantly related to reported pain intensity ( P = 0.15). However, age (<65 years, P < 0.001), presence of numbness ( P < 0.001) and recurrent hernia repair ( P = 0.003) did appear as significant determinants for chronic pain (Table  3).
Table 2
Functional impairment in 1,705 patients (missing data in 61 patients)
Values in parentheses are numbers of patients
Table 3
Assessment of risk factors for the development of pain
Age, numbness, surgical technique, and recurrent groin hernia repair. Values in parentheses are numbers of patients
* Pearson χ 2–test
**Surgical technique did not significantly relate to the development of chronic pain
×
×
Anzeige 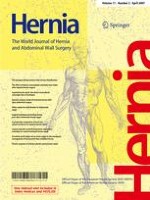 “Suture hernia”: identification of a new type of hernia presenting as a recurrence after laparoscopic ventral hernia repair

Incarcerated recurrent inguinal hernia with covered and perforated appendicitis and periappendicular abscess: case report and review of the literature