Proliferative glomerulonephritis with monoclonal immunoglobulin G (IgG) deposits (PGNMID) is a rare disease that recently became recognized. Its pathological findings are characterized by the deposition of a single heavy chain subclass and a single light chain isotype. PGNMID has been proven to recur in renal allografts. Herein, the authors describe the case of a 46-year-old man who presented with nephrotic syndrome and progressive kidney injury following kidney transplantation. One month after transplantation, his clinical condition stabilized; however, the protocol biopsy showed depositions of IgG and complement on the glomeruli by immunofluorescence staining. Electron microscopy (EM) revealed granular electron-dense deposits (EDD) in the mesangium. Thereafter, renal biopsy was repeated because his proteinuria level increased. Proliferative glomerulonephritis, mainly in the mesangium, with IgG and complement deposits and mesangial and subendothelial EDD were observed; however, the pathological diagnosis was difficult. Renal dysfunction then became apparent, and renal biopsy was performed again 4 years and 10 months after kidney transplantation. Glomerular deposits on a single IgG subclass and a single light chain isotype (IgG3 kappa) with membranoproliferative features were observed. Abundant subendothelial EDD were detected on EM. Finally, the patient was diagnosed with PGNMID. Since it seemed that PGNMID had already developed at 1 month after transplantation, we considered recurrent PGNMID case in the allograft. The treatment for PGNMID has not been established yet, and even in this case, the graft function was eventually lost. For improving renal prognosis, early diagnosis and further investigation on the treatment are necessary. 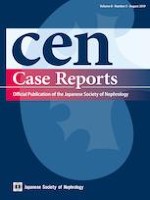