Exposure to volatile anesthetics has been reported to cause temporary or sustained impairments in learning and memory in pre-clinical studies. The selective antagonists of the histamine H3 receptors (H3R) are considered to be a promising group of novel therapeutic agents for the treatment of cognitive disorders. The aim of this study was to evaluate the effect of H3R antagonist ciproxifan on isoflurane-induced deficits in an object recognition task.

Adult C57BL/6 J mice were exposed to isoflurane (1.3 %) or vehicle gas for 2 h. The object recognition tests were carried at 24 h or 7 days after exposure to anesthesia to exploit the tendency of mice to prefer exploring novel objects in an environment when a familiar object is also present. During the training phase, two identical objects were placed in two defined sites of the chamber. During the test phase, performed 1 or 24 h after the training phase, one of the objects was replaced by a new object with a different shape. The time spent exploring each object was recorded.

A robust deficit in object recognition memory occurred 1 day after exposure to isoflurane anesthesia. Isoflurane-treated mice spent significantly less time exploring a novel object at 1 h but not at 24 h after the training phase. The deficit in short-term memory was reversed by the administration of ciproxifan 30 min before behavioral training. 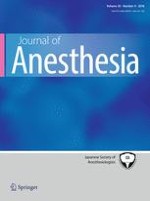 Effects of dexmedetomidine on hemodynamics and respiration in intubated, spontaneously breathing patients after endoscopic submucosal dissection for cervical esophageal or pharyngeal cancer

Regional block: who first thought of such an approach?