The online version of this article (https://​doi.​org/​10.​1007/​s00134-018-5228-3) contains supplementary material, which is available to authorized users.
The results of this paper were presented in part at the annual congress of the European Shock Society in September 2017 in Paris, France, and accepted for presentation at the annual congress of the French Society for Intensive Care in January 2018 in Paris, France.
Marianna Parlato and François Philippart are first co-authors.
The members of the CAPTAIN study team are provided in the Acknowledgements section.
Minou Adib-Conquy: Deceased.

Sepsis and non-septic systemic inflammatory response syndrome (SIRS) are the same syndromes, differing by their cause, sepsis being secondary to microbial infection. Microbiological tests are not enough to detect infection early. While more than 50 biomarkers have been proposed to detect infection, none have been repeatedly validated.

To assess the accuracy of circulating biomarkers to discriminate between sepsis and non-septic SIRS.

The CAPTAIN study was a prospective observational multicenter cohort of 279 ICU patients with hypo- or hyperthermia and criteria of SIRS, included at the time the attending physician considered antimicrobial therapy. Investigators collected blood at inclusion to measure 29 plasma compounds and ten whole blood RNAs, and—for those patients included within working hours—14 leukocyte surface markers. Patients were classified as having sepsis or non-septic SIRS blindly to the biomarkers results. We used the LASSO method as the technique of multivariate analysis, because of the large number of biomarkers.

During the study period, 363 patients with SIRS were screened, 84 having exclusion criteria. Ninety-one patients were classified as having non-septic SIRS and 188 as having sepsis. Eight biomarkers had an area under the receiver operating curve (ROC-AUC) over 0.6 with a 95% confidence interval over 0.5. LASSO regression identified CRP and HLA-DRA mRNA as being repeatedly associated with sepsis, and no model performed better than CRP alone (ROC-AUC 0.76 [0.68–0.84]).

The circulating biomarkers tested were found to discriminate poorly between sepsis and non-septic SIRS, and no combination performed better than CRP alone. 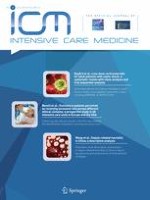 True changes in patient characteristics and outcomes or partially a reflection of different study populations?

Caution for chlorhexidine gluconate use for oral care: insufficient data

Impact of the driving pressure on mortality in obese and non-obese ARDS patients: a retrospective study of 362 cases