Fibroblast growth factor 21 (FGF21) is an adipokine and hepatokine, and its hepatic expression is induced in the injured liver. Adiponectin, whose systemic levels are positively correlated with measures of hepatic injury in patients with liver cirrhosis, is a downstream effector of FGF21. The aim of the present study was to identify possible associations of serum FGF21 with measures of liver function in patients with liver cirrhosis. FGF21 was determined by ELISA in serum of 42 patients. FGF21 was not linked to disease severity assessed by the Child–Pugh and MELD score. Levels were not changed in those patients with varices and/or ascites. Systemic FGF21 did not correlate with markers of liver and kidney function, inflammatory proteins or adipokines like adiponectin. Levels in hepatic and portal vein of 37 patients were also measured, but there was no transhepatic FGF21 gradient. Three months after insertion of a transjugular intrahepatic shunt hepatic venous pressure gradient was markedly improved, while FGF21 in serum of these 13 patients was not changed. The present study shows that hepatic release and systemic FGF21 are not linked to measures of liver function in patients with liver cirrhosis. 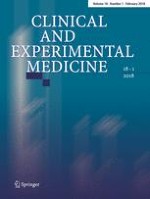 Association between telomere length and PIK3CA amplification in gastric cancer