We searched many bases to identify the included literature, which included English bases, such as, Pubmed, Embase, Web of Science, Cochrane library and Chinese bases, for instance, CNKI, Wang Fang, VIP, DuXiu, ChaoXing. We also calculated the general sensitivity and specificity, negative likelihood ratio, positive likelihood ratio, diagnostic odds ratio, ROC curve plotting and so on with Stata 15. I2 could test the heterogeneity of the meta-analysis, the funnel plot valuated whether meta-analysis had a publication bias. Regression analysis could explore heterogeneity in studies.

Comprehensive reading and integrating extracted data, we included 11 published papers. The total number of people included in the case group was 453, and the control group was 362. We, respectively, calculated the general sensitivity and general specificity which were 0.81 (95% CI 0.76–0.85) and 0.77 (95% CI 0.71–0.82) by bivariate analysis. The area under the ROC curve was 0.86 (95% CI 0.83–0.89). There was significant heterogeneity in studies which is I2 = 89.62% (95% CI 87.41%–91.83%). In addition, the results of meta-regression and subgroup analysis showed that the heterogeneity might come from gold standard, evaluation standard, experimental group size, experimental sample and race

The circulating non-coding RNAs have great ability of diagnosing endometriosis as non-invasive markers which were performed robustly and accurately. 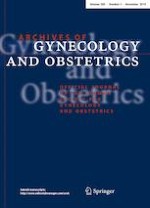 The expression of galectin-3 in breast cancer and its association with chemoresistance: a systematic review of the literature

The propolis and boric acid can be highly suitable, alone/or as a combinatory approach on ovary ischemia-reperfusion injury

Prevalence of sexual dysfunction in pregnancy

Correction to: Laparoscopy versus open surgery for adnexal masses in pregnancy: a meta-analytic review