A classification for primary and incisional abdominal wall hernias is needed to allow comparison of publications and future studies on these hernias. It is important to know whether the populations described in different studies are comparable.

Several members of the EHS board and some invitees gathered for 2 days to discuss the development of an EHS classification for primary and incisional abdominal wall hernias.

To distinguish primary and incisional abdominal wall hernias, a separate classification based on localisation and size as the major risk factors was proposed. Further data are needed to define the optimal size variable for classification of incisional hernias in order to distinguish subgroups with differences in outcome.

Several members of the EHS board and some invitees gathered at the initiative of the Belgian Section for Abdominal Wall Surgery (BSAWS) and the Dutch Hernia Society (DHS) for 2 days to discuss the development of an EHS classification for primary and incisional abdominal wall hernias.1
During an initial discussion, the existing proposals were briefly presented by one of the participants.
Thereafter, a decision was taken concerning the purpose of a classification and the scope of this consensus meeting. Some of the participants saw it mainly as a search for a simple classification. Because it was supported by and originated from the EHS, this classification could have a greater application in hospitals and in the surgical literature than the previous proposals published originating from one centre. Others were more in favour of an open structured approach, in which “scientists” would gather a maximum number of data sets in a prospective registry. With this registry, it was hoped to discover the most valuable and important risks factors for recurrence in order to direct future guidelines and therapeutic choices. It was decided to focus first on a simple, reproducible classification, because getting results out of the registry may take many years. A classification was proposed as such, including localisation of the hernia and the size of the hernia defect as decisive for the outcome, not going into its use to direct therapeutic choices for the present time. During the last session of the meeting, the development of a large, broad and open structured European registry was initiated.
Anzeige

Purpose of a classification

Format of the classification

For the primary abdominal wall hernias, there was agreement on the use of localisation and size as the two variables to use.
Anzeige

Localisation of the hernia

Size of the hernia

Primary abdominal wall hernias are usually more or less round or oval shaped. Therefore, the size can be described with one measurement. Width and length will be more or less comparable most of the time. We agreed to use the “diameter” of the primary abdominal wall hernia as the second variable. Cutoff values of 2 and 4 cm were chosen to describe three subgroups according to size: small, medium and large.

For the primary abdominal wall hernias, the choice was made for nominative description: epigastric, umbilical, small, medium and large.

It was decided to use the definition proposed by Korenkov et al. [4]: “Any abdominal wall gap with or without a bulge in the area of a postoperative scar perceptible or palpable by clinical examination or imaging”.

Choice of variables used to classify

The task of developing a good classification for incisional hernias is much more difficult than for groin hernias or for primary abdominal wall hernias because of their great diversity. On the other hand, because of this diversity a classification is highly desirable in this group of hernias. The question remains as to whether a simple classification can cover the complexities of the great diversity of incisional hernias and their different variables.
There was a consensus that the localisation of the hernia on the abdominal wall and the size of the hernia defect are essential for classifying. There was less agreement on the inclusion of the number of previous hernia repairs as a variable for classifying. Including more variables (Table 1) in the classification will make it more complex and less practical. Other variables and risk factors will be part of the above-mentioned registry, but for the present, will not be part of a simple classification.

Localisation of the hernia

The abdomen was divided into a medial or midline zone and a lateral zone.

The borders of the midline area are defined as:
(1)
cranial: the xyphoid
(2)
caudal: the pubic bone
(3)
lateral: the lateral margin of the rectal sheath
Thus, all incisional hernias between the lateral margins of both rectus muscle sheaths are classified as midline hernias.
The Chevrel classification uses three midline zones [3]. Our group agreed that hernias close to bony structures have separate subgroups. They pose specific therapeutic approaches and have an increased recurrence risk. An easily memorable classification from M1 to M5 going from the xiphoid to pubic bone was proposed (Fig. 1). Therefore, we define 5 M zones:
(1)
M1: subxiphoidal (from the xiphoid till 3 cm caudally)
(2)
M2: epigastric (from 3 cm below the xiphoid till 3 cm above the umbilicus)
(3)
M3: umbilical (from 3 cm above till 3 cm below the umbilicus)
(4)
M4: infraumbilical (from 3 cm below the umbilicus till 3 cm above the pubis)
(5)
M5: suprapubic (from pubic bone till 3 cm cranially).
×
Several questions arose from this classification:
(1)
How should hernias extending over more than one M zone be classified? No consensus was reached on this. One proposal was to allocate hernias to the M zone that is generally considered as the more difficult or more representative for the hernia. They are, in order of importance: first subxyphoidal (M1) and suprapubic (M5), then umbilical (M3) and finally epigastric (M2) and infraumbilical (M4). This would avoid making further subgroups (e.g. M1-2/M1-2-3/M2-3-4). So a hernia extending from M1 over M2 to M3 (thus from subxyphoidal to the umbilicus) would be classified as M1 (thus as a subxiphoidal hernia). A hernia extending from M2 over M3 to M4 (thus from epigastric to infraumbilical) would be classified as M3 (thus as an umbilical hernia). No consensus was reached on this. It was decided to mark every zone in which the hernia was located when using the grid for incisional hernias.
(2)
How should incisional hernias with multiple defects be classified? Different hernia defects caused by one incision will be considered as one hernia. If the different defects were caused by two different incisions, they should be considered two different hernias.

The borders of the lateral area are defined as (Fig. 2).
(1)
cranial: the costal margin
(2)
caudal: the inguinal region
(3)
medially: the lateral margin of the rectal sheath
(4)
laterally: the lumbar region.
×
Thus, four L zones on each side are defined as:
(1)
L1: subcostal (between the costal margin and a horizontal line 3 cm above the umbilicus)
(2)
L2: flank (lateral to the rectal sheath in the area 3 cm above and below the umbilicus)
(3)
L3: iliac (between a horizontal line 3 cm below the umbilicus and the inguinal region)
(4)
L4: lumbar (latero-dorsal of the anterior axillary line)

Once subgroups had been defined, it was important to give them a name. Some of the experts were in favour of using simple coded notations similar to the Chevrel classification: M1, M2, M3,… L1, L2…. W1, W2,…. Others preferred a descriptive name: umbilical, supraumbilical, subcostal,…. The advantage of a nominative description over a coded description is that it is more self-explanatory and comprehensible. No real consensus was reached over this topic, and a combination of coded and nominative descriptions is proposed.
Much discussion took place concerning the best word to describe the area on the lateral side of the abdomen below the subcostal region and above the iliac region. It was agreed that the word “transverse” as used in the Chevrel classification was not satisfactory. Finally, it was agreed to call this area the “flank”.

Size of the hernia

Several participants in the meeting considered that if an incisional hernia is a recurrence after previous repair of a hernia—either incisional or primary—then this variable should be included in the classification. The number of previous hernia repairs was not considered of enough importance to include in the table. A simple yes or no answer was chosen. 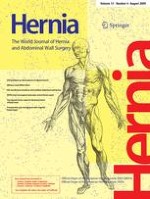 Reply to the Letter to Editor by Prof. Desarda: inguinal hernia repair: the hypothesis postulated in the article is not true

Incarceration of Meckel’s diverticulum through a ventral incisional defect: a rare presentation of Littre’s hernia

Delayed repair for traumatic abdominal wall hernia: is it safe?