Sagittal balance reflects a shape of the spine that allows it to keep the standing position with little muscle effort [ 1]. The shape of the spine is the result of the sum of the shapes of bony elements (the vertebrae) and discs. Bone resists compression and keeps its shape under physiological compressive forces. Discs are also resistant to compression, and can keep a definite shape under physiological compression forces. It is necessary to apply a torque on the vertebral segment to create a deformation of the spine in flexion–extension (the directions of deformation relevant to sagittal balance). A degenerated disc loses to some extent its ability to keep the disc space shape and deforms under physiological compression forces [ 2], being flexion the most frequent direction of the deformation (causing sagittal anterior displacement of the spine). If the disc degeneration is coronally asymmetrical, physiological compression forces can cause in the disc a combined deformation in flexion (kyphosis) and lateral bending (scoliosis), usually coupled with axial torsion (rotation). Thus, an effect of aging on the spine is the trend toward loss of sagittal alignment. Other factors that can cause impairment of sagittal alignment are fractures (through kyphotic changes in bone shape), congenital or developmental deformities (as posterior hemivertebra, anterior bone bridges or combined disc and bone deformity, like in Scheuermann’s disease).
Sagittal balance status has been demonstrated to be an independent predictor of clinical status and outcomes in subjects with adult scoliosis [ 3], in patients undergoing surgery for adult deformity [ 4], degenerative disc disease [ 5] and degenerative spondylolisthesis [ 6]. Surgical correction of sagittal imbalance has correlated with clinical improvement [ 7].
Anzeige
Much of the research effort in this field has focused on calculation of the amount of correction needed in degenerative or postsurgical sagittal imbalance [ 1, 8– 10] and identification of ideal fusion levels in thoracic kyphosis (TK) [ 11]. Some problems remain unsolved, such as the ideal proximal level to fuse in degenerative or postsurgical imbalance, or identification of patients at risk of proximal junctional kyphosis [ 12]. Extension of the fusion area has also an influence on the incidence of complications [ 13].
Currently, no comprehensive classification of sagittal spinal deformities exists. Surgical treatment is guided by specific rules by anatomical region (i.e. for thoracic kyphosis, lumbar flat-back syndrome, etc.). A comprehensive classification of sagittal deformities that could help clinicians to improve the understanding of the condition, make possible comparison of outcomes and assist surgical planning would be desirable. The aim of this paper is to present a classification of sagittal spinal deformities based on the level of the deformity and the existing compensatory mechanisms.

One hundred and twenty-eight full-spine lateral standing radiographs obtained from patients without previous spinal surgery referred to a spinal center, with a broad spectrum of spinal pathologies, were collected. The following spinopelvic parameters were measured from the radiographs: pelvic incidence (PI), pelvic tilt (PT), lumbar lordosis (LL), L4–S1 lordosis (L L4–S1), thoracolumbar lordosis (L T11–L2), thoracic kyphosis, C7–S1 sagittal vertical axis (SVA) and C2–C7 sagittal vertical axis (C2–C7 SVA). Previously published formulae and data were used to estimate the ideal sagittal parameters based on pelvic incidence [ 9, 14, 15]. Two senior spinal surgeons evaluated all the films and after discussion defined eight deformity patterns (including normal sagittal alignment). One blinded rater classified all the films in one of the eight categories.
Anzeige
Each deformity pattern was described by PI, PT, LL, L L4–S1, L T11–L2, TK, SVA and C2–C7-SVA, expressed as mean and standard deviation.
For evaluation of external validity of the classification, one subset of 35 radiographs was independently evaluated by a second rater for calculation of inter-rater agreement.
Internal validity of the classification system was evaluated comparing the values of regional sagittal parameters that distinguish one category from the others.
Statistical analysis Inter-rater agreement was evaluated with the Kappa statistic. Means were compared with the Student’s t test for independent variables. Statistical significance threshold was set at p < 0.05.

This classification method assumes that for a given patient, ideal sagittal alignment of the spine can be predicted. Previous papers have identified formulae that allow calculation of ideal lumbar lordosis and pelvic tilt from pelvic incidence [ 9, 14]. Other provides data to calculate ideal thoracic kyphosis [ 15].
In this paper, sagittal imbalance is analyzed as a result of the interaction of regional deformities and compensatory mechanisms to present as deformity patterns.
A regional deformity is defined as sagittal kyphotic misalignment that affects a limited number of segments of the spine (i.e. the lumbar spine, the thoracic spine, the thoracolumbar junction or the lower lumbar spine).
Compensatory mechanisms are changes in the sagittal alignment of spinal or non-spinal segments, different from those involved in regional deformity, in an attempt to restore the alignment of the gravity line or the horizontal gaze. Compensatory mechanisms need active muscle contraction by the subject.
Anzeige
Deformity patterns are the result of combining regional deformities and compensatory mechanisms and constitute the categories of this classification.
The basic principles of this classification system are summarized in Table  1.
Table 1
Basic principles of the classification

From rostral to caudal, the regional sagittal deformities of interest are
In this paper, the term kyphosis refers to any alignment of a region with more kyphosis or less lordosis than predicted.
Anzeige

From rostral to caudal, the sagittal compensatory mechanisms are
In this paper, the term hyperlordosis refers to any regional alignment with more lordosis than predicted.

Deformity patterns are described in Table  2 and illustrated in Figs.  1, 2, 3, 4, 5, 6, and 7. The classification is based on the position of the kyphotic region and the compensatory mechanisms present in the subject.
Table 2
Deformity patterns
The table describes deformity patterns based on combination of regional deformities and compensatory mechanisms present
×
×
×
×
×
×
×
Table  3 presents the distribution of the cohort along the eight categories of spinal sagittal alignment patterns and the values of the sagittal alignment parameters (mean and SD) in each category.
Table 3
Spinopelvic parameters by deformity pattern (mean ± SD)
N number of cases in each category (and total in tittle row)
PI pelvic incidence, PT pelvic tilt, LL lumbar lordosis, L L4–S1 L4–S1 lordosis, L T11–L2 thoracolumbar lordosis, TK thoracic kyphosis, SVA C7–S1 sagittal vertical axis, C2–C7 SVA C2–C7 sagittal vertical axis
Anzeige
Cervical and thoracic kyphoses, formerly receiving limited interest in the literature on sagittal imbalance, have been included in the classification. Most cases of degenerative sagittal imbalance are classified in the categories lumbar kyphosis and global kyphosis. Both are the consequence of loss of lumbar lordotic alignment. The difference between lumbar kyphosis and global kyphosis is the presence of active extension of the thoracic spine in the lumbar kyphosis category, which is not present in the more severe global kyphosis cases. Other authors have identified a higher risk of proximal junctional kyphosis after fusion of the lumbar spine stopping at the lower thoracic spine [ 12]. Atrophy of the extensor muscles in the thoracolumbar spine and thoracolumbar junction kyphosis has been described by these authors as risk factors for global kyphosis opposed to lumbar kyphosis.
Isolated thoracolumbar kyphosis frequently results from fractures in the thoracolumbar junction. This type of lesion has received little attention as a cause of sagittal imbalance. In our series, patients with thoracolumbar junction kyphosis have constantly presented compensation by lower lumbar hyperlordosis and pelvic retroversion, which demonstrates that these patients are in a hidden imbalance status.
Lower lumbar kyphosis is defined as lordosis between the superior endplates of L4 and S1 <2/3 of predicted lumbar lordosis, as expected in asymptomatic individual. This is a frequent situation in degenerative disc disease. Including this category in the sagittal imbalance classification helps clinicians to better interpret patients with lower lumbar degenerative disease and better plan surgical treatment, with attention to restore or preserve lower lumbar lordosis.
Pelvic kyphosis has received little attention in the literature, and the authors believe that constitutes a distinct category in sagittal imbalance. These patients present with an increased SVA (C7 plumbline far anterior from S1 posterior corner), but they do not exhibit signs of pelvic compensation (pelvic tilt is not increases). As a result, an apparent harmonic spine or a spine with non-severe lumbar kyphosis is projected anteriorly without a pelvic retroversion to compensate for this misalignment. We have been able to identify this pattern in patients with neurological disease, such as dystonia or Parkinson disease with poor response to pharmacological treatment. It is still unclear if every patient with pelvic kyphosis is a subject with neurological disease that causes an increase in flexor muscle activity. Nor it is clear if isolated hip disease with flexion contracture can be a second cause of pelvic kyphosis.
The external validity of the classification has been evaluated. The Cohen’s Kappa (κ) value for inter-rater agreement was 0.963 (weighted κ = 0.964). The confidence interval was from 0.892 to 1.000. Following the Landis and Koch’s criteria, the whole 95 % confidence interval represented an almost perfect agreement.
The internal validity of the classification was tested comparing the values of regional sagittal parameters that distinguish one category from the others (Table  4). Significant statistical differences between categories in key sagittal spinopelvic parameters that define distinct categories from the others have been found for all the comparisons except for the L4-S1 lordosis between lumbar and lower lumbar kyphosis ( p = 0.057).
Table 4
Comparison between categories of parameters determining allocation to deformity pattern categories (Student’s t for independent means)

None.
Open AccessThis article is distributed under the terms of the Creative Commons Attribution License which permits any use, distribution, and reproduction in any medium, provided the original author(s) and the source are credited. 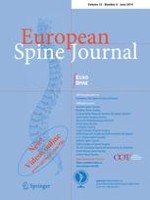 Combined thoracic and lumbar osteotomies for the correction of sagittal imbalance

MRI evaluation of lumbar spinal stenosis: is a rapid visual assessment as good as area measurement?