main-content
nach oben
Zurück zum Suchergebnis
​
print
Inhaltsverzeichnis
​
insite
Ausgabenarchiv
​
archive
​
insite
Drucken
​
print
» Jetzt Zugang zum Volltext erhalten
Wichtige Hinweise
The preliminary results of this study were presented at the XI Conference of the Italian Association for Artificial Intelligence (AIxIA), Reggio Emilia, Italy, December 9–12, 2009. The dataset used in this work is part of a larger database kept by the Research Unit on Brain Imaging and Neuropsychology (RUBIN) at the Department of Public Health and Community Medicine-Section of Psychiatry and Clinical Psychology of the University of Verona.

The objective of this study was to use a combined local descriptor, namely scale invariance feature transform (SIFT), and a non linear support vector machine (SVM) technique to automatically classify patients with schizophrenia. The dorsolateral prefrontal cortex (DLPFC), considered a reliable neuroanatomical marker of the disease, was chosen as region of interest (ROI). Fifty-four schizophrenia patients and 54 age- and gender-matched normal controls were studied with a 1.5T MRI (slice thickness 1.25 mm). Three steps were conducted: (1) landmark detection and description of the DLPFC, (2) feature vocabulary construction and Bag-of-Words (BoW) computation for brain representation, (3) SVM classification which adopted the local kernel to implicitly implement the feature matching. Moreover, a new weighting approach was proposed to take into account the discriminant relevance of the detected groups of features. Substantial results were obtained for the classification of the whole dataset (left side 75%, right side 66.38%). The performances were higher when females (left side 84.09%, right side 77.27%) and seniors (left side 81.25%, right side 70.83%) were considered separately. In general, the supervised weighed functions increased the efficacy in all the analyses. No effects of age, gender, antipsychotic treatment and chronicity were shown on DLPFC volumes. This integrated innovative ROI-SVM approach allows to reliably detect subjects with schizophrenia, based on a structural brain marker for the disease such as the DLPFC. Such classification should be performed in first-episode patients in future studies, by considering males and females separately. 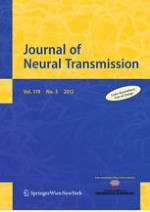 Does WOQ-9 help to recognize symptoms of non-motor wearing-off in Parkinson’s disease?