The aim of the study was to characterize clinically and biochemically mucopolysaccharidosis type II (MPS II) heterozygotes. Fifty-two women at risk to be a carrier, with a mean age of 34.1 years (range 16–57 years), were evaluated through pedigree analysis, medical history, physical examination, measurement of iduronate sulfatase (IDS) activities in plasma and in leukocytes, quantification of glycosaminoglycans (GAGs) in urine, and analysis of the IDS gene. Eligibility criteria for the study also included being 16 years of age or older and being enrolled in a genetic counselling programme. The pedigree and DNA analyses allowed the identification of 40/52 carriers and 12/52 non-carriers. All women evaluated were clinically healthy, and their levels of urinary GAGs were within normal limits. Median plasma and leukocyte IDS activities found among carriers were significantly lower than the values found for non-carriers; there was, however, an overlap between carriers’ and non-carriers’ values. Our data suggests that MPS II carriers show lower plasma and leukocyte IDS activities but that this reduction is generally associated neither with changes in levels of urinary GAGs nor with the occurrence of clinical manifestations. 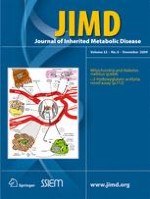 Erratum to: Prediction of outcome in isolated methylmalonic acidurias: combined use of clinical and biochemical parameters

Ear symptoms in children with Fabry disease: data from the Fabry Outcome Survey