We report on a single-center cohort of 184 pediatric patients affected with selective IgA deficiency and describe the characteristics at diagnosis and during follow-up.

Respiratory infections were the most common clinical finding leading to the initial diagnosis (62%). Positive family history for antibody deficiencies (selective IgA deficiency, common variable immunodeficiency) led to SIgAD diagnosis in 16% of cases. During follow-up, while the incidence of respiratory infections was not particularly high, gastrointestinal symptoms were reported in 27% of patients. Allergic manifestations were found in 23% at diagnosis and an additional 16% of patients during follow-up, leading to a prevalence of atopy of 39% among SIgAD patients. Autoimmune manifestations, excluding celiac disease, were found in 9% of affected patients during follow-up. Celiac disease was found in a high prevalence (14%). Increase of serum IgA levels to partial deficiency (9%) and normal serum levels for age (4%) was observed during follow-up. A small percentage of patients (2%) progressed to common variable immunodeficiency (CVID).

In conclusion, this is the first study to describe a large single-center pediatric cohort of patients affected with SIgAD, revealing that overall most patients do well with regard to infections. Many develop CD, at a rate much higher than the general population. A few normalize their IgA levels. A few progress to CVID. Thus, careful follow-up is suggested to diagnose and treat potential complications earlier for avoiding potential morbidities. 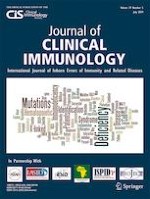 Correction to: Life-Threatening Infections Due to Live-Attenuated Vaccines: Early Manifestations of Inborn Errors of Immunity