The aim of this study was to identify the common clinical and laboratory findings associated with the reproductive disorders in Arabian mares in Saudi Arabia. A total of 219 mares were examined for reproductive disorders. Breeding history was obtained. Barren mares were examined for general health condition and body condition score. External genitalia were evaluated via inspection and measurement. Genital tract was examined by palpation per rectum and exploration per vagina. Transrectal ultrasound was used for examination of the ovarian and uterine structures and contents. Uteroscopy was performed for visual information of the endometrium. Cervical cytology was collected and mares were categorized as having normal cytology (neutrophils 0–1/field), moderate inflammation (2–5 neutrophils/field), or severe inflammation (> 5 neutrophils/field). Cervical specimens were aseptically collected, cultured, and identified using BioMérieux Vitek two compact system. The results showed that moderate and severe endometritis were found in 60 (27.4%) and 39 (17.8%) barren mares, respectively. E. coli was the common isolated bacteria. E. coli, Pseudomonas aeruginosa, Streptococcus equi zooepidemicus, and Klebsiella pneumoniae were frequently isolated from mares with severe endometritis. Narrowing or adhesion of the cervix and/or vagina was found in 36 (16.4%) cases, more than half of them were associated with pyometra. Small inactive ovaries were observed in 35 (15.8%) cases and commonly detected in mares with low body condition. Multiple endometrial cysts were observed in 31 (14.1%) mares, all of them were older than 10 years. Pneumvagina was diagnosed in 18 (8.2%) cases and mainly seen in old mares and/or those with thin body condition. In conclusion, endometritis was the common clinical findings in barren Arabian mares in Saudi Arabia, while E. coli was the frequent isolated bacteria. 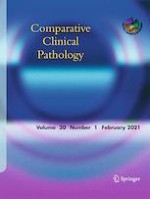 Serum calcium determination with atomic absorption spectrophotometry and colorimetric method: association and predictive equations between them in cattle and sheep samples