Ischemic conditioning is a form of endogenous protection induced by transient, subcritical ischemia in a tissue. Organs with high sensitivity to ischemia, such as the heart, the brain, and spinal cord, represent the most critical and potentially promising targets for potential therapeutic applications of ischemic conditioning. Numerous preclinical investigations have systematically studied the molecular pathways and potential benefits of both pre- and postconditioning with promising results. The purpose of this review is to summarize the present knowledge on cerebral pre- and postconditioning, with an emphasis in the clinical application of these forms of neuroprotection. A systematic MEDLINE search for the terms preconditioning and postconditioning was performed. Publications related to the nervous system and to human applications were selected and analyzed. Pre- and postconditioning appear to provide similar levels of neuroprotection. The preconditioning window of benefit can be subdivided into early and late effects, depending on whether the effect appears immediately after the sublethal stress or with a delay of days. In general, early effects have been associated posttranslational modification of critical proteins (membrane receptors, mitochondrial respiratory chain) while late effects are the result of gene up- or downregulation. Transient ischemic attacks appear to represent a form of clinically relevant preconditioning by inducing ischemic tolerance in the brain and reducing the severity of subsequent strokes. Remote forms of ischemic pre- and postconditioning have been more commonly used in clinical studies, as the remote application reduces the risk of injuring the target tissue for which protection is pursued. Limb transient ischemia is the preferred method of induction of remote conditioning with evidence supporting its safety. Clinical studies in a variety of populations at risk of central nervous damage including carotid disease, cervical myelopathy, and subarachnoid hemorrhage have shown improvement in surrogate markers of injury. Promising preclinical and early clinical studies noting improvement in surrogate markers of central nervous injury after the use of remote pre- and postconditioning treatments demand follow-up systematic investigations to address effectiveness. Challenges in the application of these techniques to pressing clinical cerebrovascular disease ought to be overcome through careful, well-designed, translational investigations. 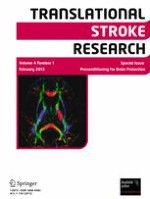 Hurdles to Clear Before Clinical Translation of Ischemic Postconditioning Against Stroke

Epigenetics and the Environment: In Search of the “Toleroasome” Vital to Execution of Ischemic Preconditioning

Steps to Translate Preconditioning from Basic Research to the Clinic