Infants with hypoplastic left heart syndrome (HLHS) are at risk for interstage morbidity and mortality, especially between the first and second surgical stages after the Norwood and hybrid procedures. This study compared the morbidity and mortality of patients treated by either the Norwood or the hybrid procedure for HLHS between the first and second stages who were undergoing interstage monitoring. Between October 2008 and December 2011, 26 infants (14 boys) with HLHS (n = 16) and other univentricular heart malformations with aortic arch anomaly (n = 10) were scheduled for interstage monitoring after Norwood I (n = 12) and hybrid (n = 14) procedures. Three infants (11.5 %) died after first-stage palliation (one hybrid patient and two Norwood patients), and three infants (11.5 %) died after second-stage palliation (two hybrid patients and one Norwood patient) (p = 0.83), all after early second-stage surgery (<90 days). The Norwood I and hybrid procedures did not differ in terms of overall mortality (23 %) (three hybrid and three Norwood patients; p = 1.00). Seven infants (26.9 %) could not be discharged from the hospital due to hemodynamic instability and were referred for early second-stage surgery (<90 days). After the first stage, the invasive reevaluation rate before discharge was high (53.8 %), with cardiac catheterizations for 8 of 14 patients after the hybrid procedure and for 6 of 12 patients after the Norwood procedure (p = 0.69). A total of 11 reinterventions were performed (eight by catheter and three by surgery). Of the eight catheter reinterventions, five were performed for hybrid patients (p = 0.22). For 14 infants, 89 days (range 10–177 days) of interstage monitoring were scheduled. One infant (3.9 %) died during the interstage monitoring. The findings showed a breach of the physiologic criteria for interstage monitoring in seven infants (50 %) after 10 days (range 4–68 days) (five hybrid and two Norwood patients), leading to rehospitalization and catheterization for six patients (four hybrid and two Norwood patients), requiring interventions for two patients (patent arterial duct stent dilation, and atrial septal defect stenting, all for hybrid patients). Overall, three of the seven patients with red flag events of interstage monitoring were candidates for early second-stage surgery. In conclusion, morbidity among infants treated for HLHS remains high, either before or after hospital discharge, emphasizing the need of interstage monitoring programs. Despite retrograde aortic flow in infants with HLHS after the hybrid procedure, the mortality rate was comparable between the two groups. Mortality occurs after early second-stage surgery (<90 days). 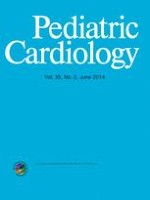