The incidence of cefepime-induced neurotoxicity (CIN) has been previously underestimated, and there have only been sporadic reports from critical neurological settings. The present study aimed to investigate the potential factors associated with disease development, electroencephalography (EEG) sub-classification, and outcome measures.

The 10-year medical records of patients who underwent EEG between 2007 and 2016 at a tertiary medical center in Taiwan, and developed encephalopathy after cefepime therapy were retrospectively reviewed. Age- and sex-matched controls were included for further analysis. Demographic data, the occurrence of clinical seizures, non-convulsive status epilepticus (NCSE), use of antiepileptic drugs (AEDs), receiving maintenance or urgent hemodialysis, EEG findings, and functional outcomes were analyzed. The Chi-square test and a logistic regression model were applied to survey significant prognostic factors relating to mortality.

A total of 42 CIN patients were identified, including 25 patients from wards and 17 from intensive care units; their mean age was 75.8 ± 11.8 years. Twenty-one patients (50%) had chronic kidney disease, and 18 (43%) had acute kidney injury. Among these patients, 32 (76%) received appropriate cefepime dose adjustment. Three patients had a normal renal function at the time of CIN onset. The logistic regression model suggested that maintenance hemodialysis and longer duration of cefepime use were independently associated with the development of CIN, with odds ratios of 3.8 and 1.2, respectively. NCSE was frequently noted in the CIN patients (64%). Generalized periodic discharge with or without triphasic morphology was the most common EEG pattern (38%), followed by generalized rhythmic delta activity and generalized spike-and-waves. AEDs were administered to 86% of the patients. A total of 17 patients (40%) did not survive to hospital discharge. Adequate cefepime dose adjustment and early cefepime discontinuation led to a better prognosis.

CIN was associated with high mortality and morbidity rates. Neurotoxic symptoms could still occur when the cefepime dose was adjusted, or in patients with normal renal function. Patients with maintenance hemodialysis or a longer duration of cefepime therapy tended to develop CIN. Early recognition of abnormal EEG findings allowed for the withdrawal of the offending agent, resulting in clinical improvements and a better prognosis at discharge. 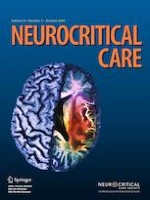 A Survey of Multidenominational Rabbis on Death by Neurologic Criteria

A Day in the Life of a Neurocritical Care Trainee

Perioperative Treatment of Brain Arteriovenous Malformations Between 2006 and 2014: The Helsinki Protocol

Intracerebral Hemorrhage in Women: A Review with Special Attention to Pregnancy and the Post-Partum Period