To determine whether PD mDixon TSE water-only and, by proxy, PD in-phase images generated by one acquisition can replace two conventional PD TSE sequences with and without fat suppression in routine clinical MR examination of the knee.

This is a retrospective study of 50 consecutive pediatric knee MR examinations. PD mDixon TSE water-only and PD fat-saturated TSE sequences (acquired in the sagittal plane with identical spatial resolution) were reviewed independently by two pediatric radiologists for homogeneity of fat suppression and detection of intra-articular pathology. Thirteen of the 50 patients underwent arthroscopy, and we used the arthroscopic results as a reference standard for the proton-density fat-saturated and proton-density mDixon results. We used the Kruskal-Wallis rank test to assess difference in fat suppression between the proton-density mDixon and proton-density fat-saturated techniques. We used kappa statistics to compare the agreement of detection of intra-articular pathology between readers and techniques. We also calculated sensitivity, specificity and accuracy between arthroscopy and MR interpretations. 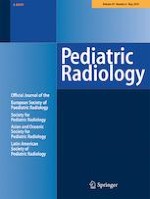 Stressors contributing to burnout amongst pediatric radiologists: results from a survey of the Society for Pediatric Radiology

Imaging of diseases of the vagina and external genitalia in children