Staphylococcus aureus (S. aureus) is a major cause of mastitis in small ruminants, and studies on the potential application of acute phase proteins (APPs) in disease biomarkers and understanding the disease mechanism in mastitis affecting small ruminants are limited. Thus, the objective of this study was to determine clinical, histopathological changes and serum concentrations of serum amyloid A (SAA) and haptoglobin (Hp) associated with experimentally induced mastitis using S. aureus. Left mammary quarter in the does was challenged with sterile Ringers buffered salt solution as group 1 (control animals; n = 6) and S. aureus (1.5 × 108 cfu/ml) as group 2 (inoculated does; n = 5) respectively. The animals were monitored at various time intervals for the signs of mastitis and serum concentrations of Hp and SAA. Majority of the animals in the inoculated group showed typical signs of acute mastitis characterized with fever, warm, painful, and swollen mammary gland as early as 24-h post-inoculation (PI). There was significant increased (p < 0.05) in the levels of Hp and SAA in the serum of inoculated animals at 24-h post-inoculation. Histopathological changes in the mammary gland of the inoculated goats included generalized and severe infiltration of the interstitial spaces with polymorphonuclear neutrophils (PMN), severe necrosis of secretory cells, and hyperplastic epithelial and luminal lining. In conclusion, inoculation of S. aureus intramammarily leads to an increment of Hp and SAA at 24-h PI which indicates that both APPs played crucial role as biomarkers in detection and monitoring of S. aureus mastitis in goats. 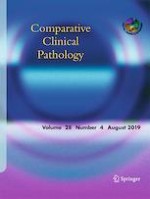 The therapeutic potential of aqueous extract of Falcaria vulgaris in the treatment of fatty liver disease: a histopathological and biochemical approach

Aging of bovine spinal cord: an alteration of myelinated nerve fibers in the white matter