The purpose of this study was to analyse the clinical outcomes of multiligament injured knees with respect to the medial collateral ligament and posteromedial corner (PMC) repair or reconstruction versus the posterolateral corner (PLC) reconstruction in patients operated according to a codified surgical protocol.

Patients were divided into two groups depending on whether PMC or PLC was injured. Cruciate ligaments as well as PMC or PLC were reconstructed/repaired in a one-stage procedure. At minimum of 1-year follow-up, objective and subjective International Knee Documentation Committee (IKDC) forms, Lysholm score and sports activity level were recorded.

Thirty-nine patients with a median follow-up time of 57 months (range 12–129) were reviewed. No significant difference was found for functional scores between acute PMC and PLC subgroups. In Group PLC, subjective outcomes tend to be better in the acute than in chronic reconstruction subgroup.

A one-stage protocol with early surgery rather than delayed reconstruction produced better clinical outcomes whatever the injured collateral ligament, medial or lateral. In the future, early and chronic reconstructions as well as each injury pattern should be considered as separate entities in studies on multiple ligament injured knees to reach a better level of evidence. 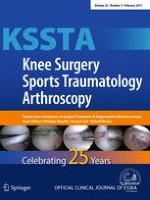 Newly acquired arthroscopic skills: Are they transferable during simulator training of other joints?

How sensitive and specific is 1.5 Tesla MRI for diagnosing injuries in patients with knee dislocation?