The purpose of this study was to compare the clinical outcomes and survival rate of autologous chondrocyte implantation (ACI) with or without concomitant meniscus allograft transplantation (MAT).

ACI with concomitant MAT did not restore clinical outcomes as much as isolated ACI. There was a trend for the long-term survival rate to be greater in isolated ACI than ACI with MAT. These results should be considered in planning for the treatment of focal chondral defect with meniscus deficiency. 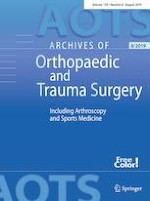 A surgical algorithm for the management of recalcitrant distal femur nonunions based on distal femoral bone stock, fracture alignment, medial void, and stability of fixation

Practicability of a locking plate for difficult pathologies of the scaphoid

Does the critical shoulder angle decrease after anterior acromioplasty?