Patients received 0.16 mg/kg ATO per day. ATO was given for 40 min infusion on the first day followed by 18–20 h daily at a very slow rate with infusion speed of 8 drips/min. During the first week, plasma samples were collected immediately before next administration on each day, and 0.5, 1, 2, 4, 8, 12 h after administration, at the end of infusion (18 h) on day 7. Total arsenic was determined by ICPMS. Arsenic species, arsenious acid (AsIII) and its metabolites, monomethylarsonic acid (MMAV) and dimethylarsinic acid (DMAV), were quantified by UHPLC-ICPMS. Safety assessment and PK analysis was conducted.

Continuous slow-rate ATO infusion provided an alternative administration for ATO therapy with few toxic effects. Degree of methylation from MMA to DMA is inconsistent with that from iAs to MMA. PK of arsenic species is considered important for clinical use of ATO. 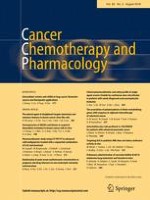