For this type of study, formal consent is not required.
Open AccessThis article is distributed under the terms of the Creative Commons Attribution 4.0 International License ( http://​creativecommons.​org/​licenses/​by/​4.​0/​), which permits unrestricted use, distribution, and reproduction in any medium, provided you give appropriate credit to the original author(s) and the source, provide a link to the Creative Commons license, and indicate if changes were made. 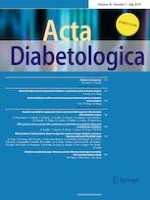 Minimal effect of walking before dinner on glycemic responses in type 2 diabetes: outcomes from the multi-site E-PAraDiGM study

Maternal height and risk of gestational diabetes: a systematic review and meta-analysis