There is insufficient data from India regarding clinical predictors of dyssynergic defecation.

To identify demography, symptom, and colonoscopic parameters that can predict dyssynergic defecation (DD) among patients with chronic constipation (CC) and to compare the profile among male and female patients with DD.

Data collected from three centers during June 2014 to May 2017 included age, gender, symptom duration, form and consistency of stools, digital examination, colonoscopy, and anorectal manometry (ARM). Patients were grouped based on ARM diagnosis: group I (normal study) and group II (DD). The two groups were compared for demography, symptom profile, and colonoscopy findings. Gender-wise subset analysis was done for those with the normal and abnormal ARM using chi-square and unpaired t tests.

Of 236 patients with CC evaluated, 130 (55%) had normal ARM and 106 (45%) had DD. Male sex, straining during defecation, bleeding per rectum, and abnormal colonoscopic diagnosis were significantly more common in group II. While bleeding per rectum and absence of urge to defecate were more common in males (p < 0.02), straining, digital evacuation, and hard stools were commoner in females with DD. 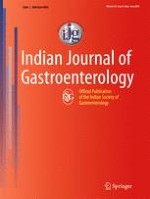 Vitamin D levels in ulcerative colitis at first diagnosis: Does it “bell the cat”?

Is the emergence of inflammatory bowel disease a prime example of “the third epidemiological transition”?