Primary sclerosing cholangitis (PSC), a chronic progressive cholestatic liver disease of unknown cause, is uncommon in India. The aim of this study was to define the profile and outcomes of patients with PSC in a tertiary centre from western India.

A retrospective study of the prospectively maintained liver clinic database was searched for cases of PSC between January 2008 and December 2017 with minimum 6 months follow up. All cases were reviewed for clinical profile, inflammatory bowel disease (IBD) co-morbidity and major endpoints like death, cholangiocarcinoma and liver transplantation (LT).

We identified 28 (18 men) patients with PSC (19, 67% large-duct and 9, 33% small-duct) with a median age of 31.5 years (range 7–63 years) with median duration of follow up of 24 months (6–125 months). Six (21.4%) had autoimmune hepatitis (AIH-PSC) overlap. Inflammatory bowel disease was seen in 12 (43%) cases, all were ulcerative colitis (UC). During follow up, seven patients (25%) developed dominant stricture or recurrent cholangitis, 11 (39%) had  portal hypertension, 2 (7%) developed cholangiocarcinoma and 5 (17.8%) progressed to hepatic  decompensation on follow up. Ten (35%) patients died, 5 from liver-related complications, 2 from cholangiocarcinoma, 1 each from brain hemorrhage and systemic sepsis and 1 due to unknown cause; 3 underwent liver transplantation. Revised Mayo score of patients who survived was lower than those who died (1.03 vs. 1.86, p value 0.03).

PSC commonly presents in young age and rapidly progresses to decompensation. Prevalence of IBD in PSC is lower and the proportion of small-duct PSC is higher than that observed in western populations. 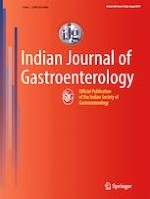 Per-oral endoscopic myotomy and gastroesophageal reflux: Where do we stand after a decade of “POETRY”?

Is everolimus linked to metabolic syndrome in liver transplant recipients?