To study the clinical profile of patients with long QT syndrome presenting as seizures.

Retrospective analysis of six pediatric patients admitted at authors’ institute between October 2008 and January 2013 with seizures and a presumptive diagnosis of long QT syndrome (LQTS) was done. The diagnosis was made on the basis of updated Schwartz diagnostic criteria. Clinical data, investigation profile and follow up of patients was recorded in a standard format and analysed.

All the 6 patients in the study were boys with a mean age of 10.3 ± 2.8 y at the time of diagnosis. The lag period between symptom onset and diagnosis was 5.6 ± 3.14 y. All patients had history of seizures with a history of precipitating event in 4 patients. Average baseline QTc interval was 556 ± 41.31 ms. Mean Schwartz score was 6.66 ± 1.16. Polymorphic VT was documented in 4 patients. After initiating standard treatment with betablockers, nicorandil, spironolactone or pacemaker, all the six patients were asymptomatic at a mean follow up period of 17.5 mo, with no recurrence of seizures.

LQTS can cause seizures due to prolonged ventricular arrhythmias in high risk subgroup. Children, who present with LQTS and seizures, generally have a precipitating event causing seizures, and they respond well to drug therapy. 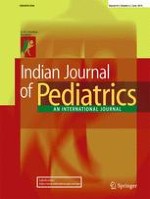 Cryptococcal Meningitis: Description of 3 Cases and Estimation of T-cell Subsets

The Art, Science and Philosophy of Newborn Care

Diagnosis and Management of Down Syndrome