The online version of this article (https://​doi.​org/​10.​1007/​s00432-018-2710-9) contains supplementary material, which is available to authorized users.
Leticia Oliveira-Ferrer and Sabine Windhorst contribute equally to the manuscript.

Ovarian cancer has a high mortality rate and up to now no reliable molecular prognostic biomarkers have been established. During malignant progression, the cytoskeleton is strongly altered. Hence we analyzed if expression of certain cytoskeleton-associated proteins is correlated with clinical outcome of ovarian cancer patients.

First, in silico analysis was performed using the cancer genome atlas (TCGA), the human expression atlas and Pubmed. Selected candidates were validated on 270 ovarian cancer patients by qRT-PCR and/or by western blotting. 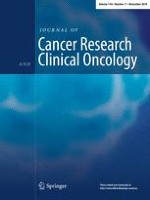 Lentinan as an immunotherapeutic for treating lung cancer: a review of 12 years clinical studies in China