Anti-GQ1b antibodies can be detected in the serum of patients with Miller Fisher syndrome (MFS) and its incomplete forms such as acute ophthalmoparesis (AO), acute ptosis, acute mydriasis, acute oropharyngeal palsy and acute ataxic neuropathy (AAN), as well as in pharyngeal–cervical–brachial weakness, Bickerstaff brainstem encephalitis (BBE) and in overlap syndromes with Guillain–Barré syndrome (MFS–GBS, BBE–GBS). We searched the laboratory medicine database at University Hospitals Leuven between 2002 and 2017 for serum samples with anti-GQ1b IgG antibodies. We identified eight patients with anti-GQ1b antibodies: 4 MFS, 2 AO, 1 MFS–GBS and 1 AAN. Mean age was 57 years and five patients were males. Preceding illness was present in all patients. At nadir, we observed most frequently gait disturbance, external ophthalmoplegia and absent/decreased reflexes. Albumino-cytological dissociation was present in four patients. Mean time between onset and nadir was 4 days, between onset and recovery 2.5 months. Five patients recovered completely and three had minor residual symptoms. Interestingly, one patient with AO experienced a second identical episode, approximately 1 year after the first one. Our data confirm the broad clinical spectrum associated with the presence of anti-GQ1b IgG antibodies. Incomplete MFS subtypes such as AO are a challenge for diagnosis, because of the limited (though invalidating) clinical presentation and the lack of confirming ancillary tests. Subacute onset of ophthalmoplegia and/or ataxia should urge the clinician to include the anti-GQ1b antibody syndrome in the differential diagnosis. 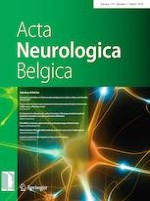