Abdominal aortic aneurysm (AAA), an abnormal focal dilation of the abdominal aorta, is a common and potentially life-threatening condition [ 1]. Only a half of patient with ruptured AAA can reach the hospital alive with an additional high operative mortality of 49 % [ 2]. In asymptomatic patients with AAA, elective repair of AAA is the most effective management to prevent the rupture of AAA with a low procedure mortality [ 3, 4]. Thus, early identification and elective repair of AAA is clinically important. Most of the patients with rupture have an undiscovered AAA [ 5], because AAA is mostly asymptomatic and occult on physical examination. Abdominal ultrasound, a fast and safe screening method to detect AAA with high sensitivity and specificity, is recommended for screening the patients who are at high risk of AAA [ 6]. Although screening for AAA during transthoracic echocardiography (TTE) has been reported to be clinically useful in Western populations [ 7– 16], little is known about the important TTE indices associated with the presence of AAA [ 12, 14, 16]. Accordingly, the aim of this study was to evaluate the clinical utility of TTE for screening AAA and to identify important TTE indices associated with AAA in a Japanese population.

We prospectively examined 1912 consecutive patients who were referred for routine TTE from June 2013 to May 2014 at Kochi Medical School Hospital. Clinical data were obtained by chart reviews. The study was approved by the Ethics Committee on Human Research of the Kochi Medical School and all the patients gave written informed consent before the study. Patients with prior AAA repair or aortic dissection were excluded from the study.
Anzeige

Feasibility of AAA screening during TTE

Clinical and TTE indices associated with the presence of AAA

The present study had 3 major findings. First, the feasibility of the abdominal aortic visualization during TTE was excellent (95.1 %). Second, the prevalence of AAA during TTE was 2.6 %. Third, the aortic root size measured by TTE was the independent predictor of AAA.
Reynolds T et al. firstly reported in 1990 that evaluation of the abdominal aorta should be carried out during a routine TTE examination [ 18]. Afterwards, other authors have reported usefulness of TTE for screening AAA [ 7– 16], because of excellent feasibility and relatively high prevalence of AAA.
The success rate of abdominal aortic imaging during TTE has been reported to range from 79 to 96 % with an additional time range from 0.5 to 8 min for examination [ 7– 16]. In the present study, we used the same cardiac transducer, so that no additional equipment was required. Moreover, an additional examination time for abdominal visualization was less than a minute in randomly selected 15 patients. These results suggest that screening of the abdominal aorta during TTE is feasible with minimal additional time and cost compared to separate abdominal ultrasound examination.
Anzeige
The prevalence of AAA during TTE has been reported to range from 2.2 % to 6.5 % in Western countries [ 7– 16], whereas the prevalence of AAA using abdominal ultrasound ranged from 3.0 % to 8.0 % from population screening surveys in Western countries [ 19]. Therefore, previous studies have demonstrated that screening for AAA during TTE is clinically useful [ 7– 16]. However, Seelig MH et al. demonstrated that TTE performed in a highly selected cardiac patient group in a tertiary referral center is not a useful tool for screening clinically unsuspected AAA [ 20], because the prevalence of AAA was low (0.8 %) and only 16 % of the patients with AAA underwent surgical repair following TTE. In Korean population [ 21], detection rate of AAA was 0.5 % during TTE indicating that the prevalence of AAA in Asia is lower than that in Western countries. Despite the low prevalence of AAA, a routine examination of the abdominal aorta during TTE appeared to be an effective preventive strategy for life-threatening but asymptomatic AAA, because 26 % of the patients with AAA underwent surgical repair or endovascular aortic stent graft insertion following the TTE. In the present study, the prevalence of AAA during TTE was 2.6 %. Moreover, 30 % of the patients of the present study with AAA underwent aortic repair following the TTE. These results suggest that screening for AAA during TTE also appeared to be clinically useful in a Japanese population.
Among the TTE indices associated with the presence of AAA, LV hypertrophy, LV dilatation, or low LV fractional shortening are likely relate to hypertension; 70 % of the patients with AAA had hypertension. Although Bekkers SC et al. reported that patients with AAA had dilated ascending aorta [ 12], little is known about the clinical importance of the aortic root size in association with AAA [ 14, 22]. Recently, Aboyans et al. have reported that the ascending aorta is larger in patients with AAA than those without by univariate analysis [ 16], though it is unknown about the exact position of measurement of the ascending aorta. Agricola E et al. have also demonstrated a high prevalence of dilatation/aneurysm of the ascending aorta and the aortic arch in patients with AAA evaluated by TTE [ 23]. These studies suggest a significant correlation between dilatation of the ascending aorta and the arch and AAA. However, discriminating cutoff value of the ascending aortic size for predicting AAA was not determined. Multivariate analysis was also not used to determine the significance of the ascending aortic size in association with AAA. Thus, it still remains unknown whether the ascending aortic size is important TTE indices for screening AAA.
In contrast, we measured the aortic root size at the level of the sinus of Valsalva. The aortic root size of ≥ 34 mm was predictive of AAA by receiver operating characteristic curve analysis. The aortic root size was the independent TTE index associated with the presence of AAA. As the common risk factors for AAA and atherosclerosis may lead to the aortic root dilatation, considering the fact that aortic root size and age were independent predictors of AAA, our study indicate that screening for AAA during TTE can be useful especially in the older patients with a large (≥34 mm) aortic root size. Although screening for AAA during TTE has been reported to be useful [ 7– 16], the screening limiting to the older patients with a large (≥34 mm) aortic root size can be clinically efficient.
The present study has several limitations. First, the incidence of AAA depends on patient selection. However, the prevalence of AAA of 2.6 % in the present study was not significantly different of that reported in Western countries (2.2 % to 6.5 %). Second, AAA was incidentally discovered before the present study at least in 18 patients (60 %) as the result of other abdominal imaging studies obtained to evaluate an unrelated condition such as spine magnetic resonance imaging, computed tomography, or abdominal ultrasound, though the reasons for diagnosis of AAA were not available in the other 12 patients. The increasing use of imaging modalities has revealed asymptomatic and previously undiagnosed AAA. Therefore, we did not exclude patients with previously known AAA. Third, the atherosclerotic risk factors in patients with AAA were only available concerning a prior or current history of smoking, hypertension, and ischemic heart disease in the present study. Moreover, the atherosclerotic risk factors in patients without AAA were not available. The lack of information on the prevalence of traditional risk factors for atherosclerosis in patients with and without AAA does not allow stratifying the patients more likely to have AAA, according to atherosclerotic risk profile. Fourth, early detection of small AAA during TTE could cause needless disease labeling and anxiety resulting in psychological harm. Further studies are required to verify the clinical usefulness, cost-effectiveness, and psychological harm of AAA screening during TTE in different healthcare settings.
Anzeige

Visualization of the abdominal aorta during TTE is feasible with little additional time and cost. The aortic root size was the important TTE index associated with the presence of AAA. Screening for AAA during TTE was especially useful in the older patients with a large (≥34 mm) aortic root size.
Open AccessThis article is distributed under the terms of the Creative Commons Attribution 4.0 International License ( http://​creativecommons.​org/​licenses/​by/​4.​0/​), which permits unrestricted use, distribution, and reproduction in any medium, provided you give appropriate credit to the original author(s) and the source, provide a link to the Creative Commons license, and indicate if changes were made. The Creative Commons Public Domain Dedication waiver ( http://​creativecommons.​org/​publicdomain/​zero/​1.​0/​) applies to the data made available in this article, unless otherwise stated. 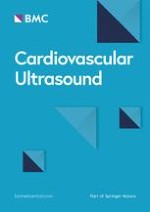 Clinical and echocardiographic predictors of mortality in acute pulmonary embolism