To study the clinico-etiological profile of epilepsy in children aged 1–24 mo attending a tertiary-care public hospital.

All infants aged 1–24 mo with epilepsy (as per International League Against Epilepsy, 2014) presenting between April 2016 and March 2017 were enrolled. Detailed history and examination were done in all children, and developmental assessment was done using Developmental Assessment Scale for Indian Infants (DASII). Electroencephalography and neuroimaging (CT/MRI) were done for all subjects.

Epilepsy in children <2 y is symptomatic in the majority, with sequelae of birth asphyxia as the commonest etiology. High prevalence of co-morbid developmental delay underscores the need for routine evaluation and early intervention in all high-risk infants. 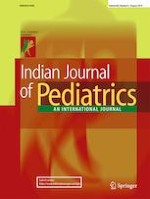 Diagnosis and Management of Multidrug-Resistant Tuberculosis in Children: A Practical Approach

Cardiac Troponin-T as a Marker of Myocardial Dysfunction in Term Neonates with Perinatal Asphyxia: Correspondence