The purpose of this study was to investigate the factors that affect the joint space narrowing after transtrochanteric anterior rotational osteotomy (ARO) for osteonecrosis of the femoral head (ONFH).

We reviewed 39 cases (43 hips) of ONFH in patients who underwent ARO between 2000 and 2004. Their mean age was 42 years (23–61) at the time of surgery. The mean follow-up period was 7.3 years (3–10). The following clinical and radiological factors were investigated: the preoperative stage, localization and extent of the necrotic lesion, and the postoperative intact ratio (transposed intact articular surface of the femoral head to the weight-bearing surface of the acetabulum). The 43 hips were divided into two groups: a joint space narrowing (JSN) group and a non-joint space narrowing (non-JSN) group. 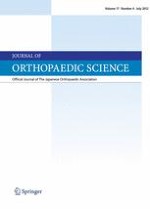